The Nargun and the Stars

This is a book that holds quite a special significance to me because it was a book that my dad read to me when I was a kid. I really think that the books your parents read to you are some of the most memorable books in a person’s lifetime, and a big proportion of my collection is dedicated to kids books – many of which I read with my parents.

I recently re-read “The Nargun and the Stars” by Patricia Wrightson after buying a beautifully illustrated hardcover edition from the Lifeline Book Fair last year. I will be posting up about what is pretty much my own personal religious holiday later this year, but suffice to say, it is amazing.

Anyway, Wrightson and illustrator Robert Ingpen are the only Australians to have ever won the Hans Christian Anderson Award – and they both won it for this book. Originally published in 1973, the edition that I have was released in 1988 to celebrate this fact, and it is just beautiful. Ingpen’s exacting and detailed renditions of the landscape up close and in exquisitely understated colours are a perfect complement to the book.

I think the story is best described as magic realism. It follows a young boy called Simon who, after he is orphaned by a car crash, goes to live with his distant relatives, brother and sister Charlie and Edie, on their farm in Wongadilla, in the Hunter Valley, NSW. At first sad, silent and sullen, Simon resents the quiet openness of the country. Soon he starts to ease into life there, and get to know his relatives and some of Wongadilla’s more shy inhabitants. However, it is a very secret enemy that finally brings Simon and his family to reconnect with the land. It is up to Simon has to summon the courage to draw upon old alliances and the cleverest of tricks to make Wongadilla a safe place once again. 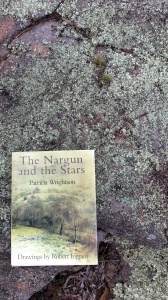 Wrightson’s stories were among the first Australian children’s books to draw on Aboriginal Dreamtime stories, and the concept of the Nargun specifically is drawn from tribal legends, including those of the Gunai/Kurnai nation in Victoria. While herself not Aboriginal, Wrightson’s story demonstrates a real respect for the land and the body of knowledge that Aboriginal people accumulated and developed over tens of thousands of years. In reading the book, you get a real sense of reverence for Australian bushland, and just how ancient this country is that we walk upon today. Children’s book scholar Mark MacLeod wrote:

However, and this is an issue that I have with a number of children’s books I have that are based on Aboriginal Dreamtime stories, this edition, together with the other edition I have, completely fails to give any kind of recognition to the Gunai/Kurnai nation and their stories of the Nargun. While I feel as though Wrightson should be commended for giving these stories life in a modern setting, and for sharing them with a wide audience, I also feel as though she and the publishers should really have given credit and thanks to the people from whom the stories originally came. Indigenous intellectual property is and remains a big issue. However, it does appear that a recent theatrical production of the story took that extra step and consulted elders from the region to give a more thorough cultural background of the creatures that feature in the book.  I think something like this can and really should be included as an introduction to the book.

The other strong theme in “The Nargun and the Stars” is its environmental message. Wrightson’s story uses the mysteries of the land to convey the message that in order to best protect the country, we must work with it, not against it, and learn about how to manage it rather than change it.

I think I’ve started to get a bit carried away, so I’ll wrap this review up to say that “The Nargun and the Stars” is an absolutely delightful story that I think any Australian can get something out of. Although set 40 years ago, the messages and themes are still very relevant today. Simon’s adventures and his foray into the secrets of the bush are enough to awaken the little kid in all of us.

3 responses to “The Nargun and the Stars”