The Picture of Dorian Gray

Everyone has heard of Oscar Wilde, however I had never actually read any of his works. My brother recommended “The Picture of Dorian Gray” and when I came across this beautiful edition, one of the Penguin Clothbound Classics, I could hardly say no.

Originally published in 1890 as a serial, today’s text represents Wilde’s revised version republished as a novel in 1891. Despite extensive revisions, the novel was nonetheless subject to an enormous amount of controversy and outrage. This edition is peppered with annotations by Peter Ackroyd who both explains themes and cultural aspects of the time as well as demonstrates how significantly the element of same-sex romance has been downplayed, muted and even removed in comparison to the original publication as a serial.

Within the very first pages of this novel two things become swiftly apparent:

1. Oscar Wilde was a literary genius who took great joy in the beauty of the written word; and

The story follows Dorian Gray, a young man of extraordinary beauty whose likeness is captured by his friend in a portrait. After a number of discussions with another friend Harry about the advantages to living a hedonistic lifestyle. Amid Harry’s jokes that Dorian would be better off to stay young and attractive forever, Dorian makes a wish that he could do exactly that and that his portrait age instead of him. Sure enough, his portrait begins to bear the scars of his increasingly selfish, immoral and excessive ways. What follows is the very Victorian depiction of the scoundrel spiraling towards his inevitable sticky end. 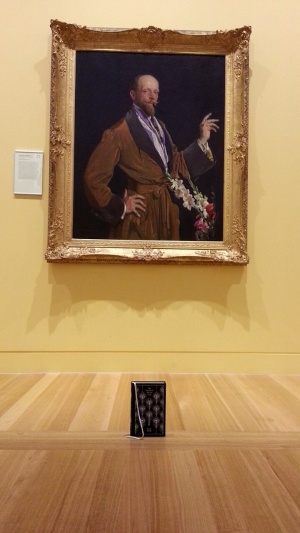 Inspired by this book to visit the National Portrait Gallery, I was disappointed to find out that I had just missed the “In the Flesh” sculpture exhibition. However, I did find this fascinating self-portrait of an Australian jackaroo-turned-artist who reminded me a lot of the narcissistic dandy Dorian Gray.

“The Picture of Dorian Gray” is a fascinating novel that is exquisitely written. It was a complete juxtaposition to my last reviewed book “A Fortunate Life”, even though both books are initially set only 10 years apart. Wilde is an incredible wordsmith and is a source many witty insights into life and art. Thematically, as I said, this book is very Victorian and is on par with Charles Dickens, the Bronte sisters and George Eliot in its depiction of the breakdown of the classes, the emerging role of entrepreneurs and the industrial revolution.

The novel is peppered with literary allusions, and Wilde himself was clearly very passionate about aesthetics and discusses at length the ornamental value of particular objets d’art and Japonsime, various fashion styles and features of gardens. The first topic is something I learned quite a bit about reading the absolutely captivating non-fiction/family autobiography “The Hare with the Amber Eyes” by Edmund de Waal. I know I’m not reviewing that book right now, but if you are interested in reading more about the Aesthetic Movement, it is an ideal place to start. 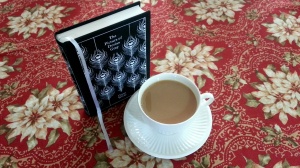 I did, however, feel as though the book began to lose traction halfway through. Wilde seemed more interested in bringing to life his many thoughts and ideas, and incorporating the many things he had learned from his extensive reading, than furthering along the plot and so some events, particularly towards the end, seem a little startling and disconnected. The books at times reads almost more like an essay on the relationship between morality and aestheticism than a novel, but is nevertheless very interesting for it. I definitely felt as though I got a lot more out of it than I would have otherwise had I not read quite a bit of classic British literature, had a rudimentary understanding of the Aesthetic Movement and the assistance of Peter Ackroyd’s extremely detailed notes. Nevertheless, a wonderful edition of a brilliant classic, and definitely a book I am glad to have finally read.

2 responses to “The Picture of Dorian Gray”