So this is the first review request I’ve been given since I started this blog. I am very, very open to review requests (especially if you send me free books hahaha…but seriously, send me free books). However, I do have quite the to-read list, so it may take a while for me to get to them (will review quicker for free books, just putting that out there). While I don’t know the author personally, Melanie Joosten is a relative of the person who requested the review, and the book is her debut novel, “Berlin Syndrome”.

“Berlin Syndrome” is probably best described as a psychological thriller, a genre that I don’t typically read much of. Architectural photographer Clare is on holidays from her job in Melbourne, and is exploring the city of Berlin when she meets local English teacher Andi. There is an immediate magnetism, and Clare spends the night in Andi’s apartment. She wakes early the next day to catch a train, and is touched when he follows her to the station and asks her to stay with him. Torn between continuing her trip and seeing where things go, she finally agrees and heads back to his apartment. However, the situation quickly turns sinister and Clare finds herself no longer at Andi’s apartment by choice. 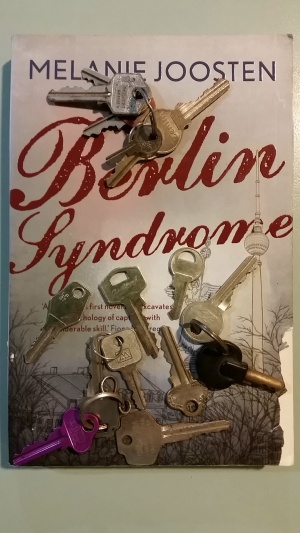 There were plenty of things I liked about this book. Joosten has a beautiful, immersive writing style that makes you feel like you really are there with Clare in Berlin. She has a real eye for realism and for capturing those odd, quirky habits and actions that make us human. The plot oscillates between the beginning of Clare’s relationship with Andi and the middle, and eventually time converges and carries you to the end. The tension throughout the book is palpable and dark, and Joosten has a knack for setting the mood.

While I loved the writing itself, I think the part that let me down a little was the characterisation. My frustration at Clare’s passivity throughout the novel was overwhelming. I constantly found myself thinking, surely she could have tried harder. Surely she could have drugged him, or taken the hinges off the door, or something. Maybe that’s the point, because she did have Stockholm Syndrome, but like you yell at the TV screen when people in horror movies run upstairs, I wanted to yell at Clare throughout. I also found Andi himself a bit perplexing, and his motivations a little insubstantial.

However, all in all, this is an eerie and captivating novel that explores some of the darker sides of human nature. It’s a quick, tense read and a classic example of the genre and I’m looking forward to seeing what they make of the film adaptation.