As is often the case, this book caught my eye browsing in one of my favourite secondhand bookstores in Canberra. Hiding out in the young readers section, it’s a gorgeous hardcover with an embossed and textured dust jacket. There were a few in the series there, but not quite in order, so I bought the first one and managed to find book two and three at the Lifeline Bookfair.

“Wolf Brother”, by Michelle Paver, is the first in the Chronicles of Ancient Darkness series. These books seem to be a bit of a young adult version of “Clan of the Cave Bear” with perhaps a dash more fantasy in that tried and tested trope of young-orphaned-boy-who-discovers-powers-goes-on-quest-and-collects-magical-objects-to-save-the-world. Surviving an attack from an unworldly giant bear, Torak of the Wolf Clan embarks on a journey to fulfill his father’s last instructions. Along the way, he takes pity on an orphaned wolf cub and discovers that he’s able to communicate with it. Together they must find a way to stop the bear, navigating harsh terrain, hostile clans and mysterious mages. 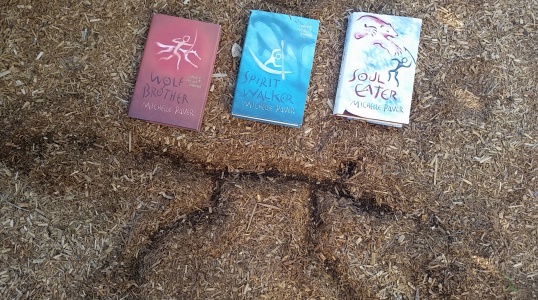 Probably the best word to describe this book is forgettable. There’s nothing intrinsically bad about it, exactly, it’s just that it’s not particularly memorable. The most interesting thing about it is all the research Paver clearly did looking at prehistoric technologies and survival strategies. Aside from that, however, the characters aren’t particularly engaging, the plot isn’t groundbreaking, and the concept isn’t especially novel. It falls squarely within the young adult fantasy genre with little to distinguish it aside from the prehistoric theme. Even writing this review I’ve had to double check details because I just simply didn’t remember much about the book. All in all, it’s fine. There are plenty of books out there that are worse, but there are also plenty of books that are better.

This series would probably be good for tweens or teens who are interested in survival and prehistoric culture. I might possibly consider buying some more of the books just because they look so pretty on my shelf, but as yet I haven’t been able to muster up the enthusiasm to tackle the second book.