This book has gotten a lot of attention lately after its adaptation into the box office success of the same name. Psychological thrillers aren’t usually my bag, but I wanted to see what all the fuss was about so I picked up a copy secondhand and gave it a whirl.

“Gone Girl”, by Gillian Flynn, is a book you just cannot put down. Power couple Nick and Amy Dunne have been hit hard by the Global Financial Crisis. When Nick loses his job as a journalist, and Amy subsequently loses hers as a quiz editor, they move from their fast-moving New York lives to Nick’s hometown in Missouri to look after his dying mother. Herself from an affluent family, Amy agrees to let Nick use her trust fund to start up a bar with his twin sister. However, their relationship is going poorly and when Amy disappears on the day of their 5th wedding anniversary, Nick finds himself in a media spotlight as the primary suspect of her disappearance, if not also her murder. 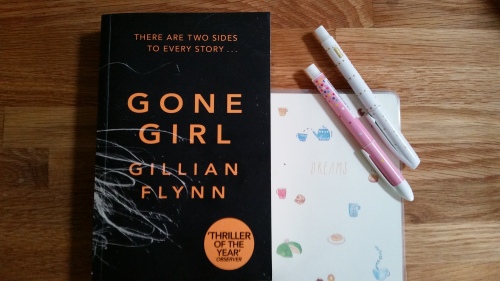 This book is kind of like seeing a train wreck: you feel like you probably shouldn’t stare, but you just can’t look away. Flynn is a master of manipulating our morbid curiosity, and for that reason her novel is utterly compelling. She maintains an optimum level of tension throughout, and I think I read all 400-odd pages in about two sittings. She’s also an evocative writer, and easily and convincingly switches between the voices of her main characters.