I hadn’t even heard of this book until the film adaption came out last year. “Room” by Emma Donoghue was actually released some years beforehand. I had heard about the Fritzl Case; the horrific story of an Austrian man who locked his daughter in his basement for over 20 years which was the inspiration for this book. I borrowed a copy from my bestie and we decided we’d watch the film after we’d both finished the book.

“Room” is written from the perspective of Jack, a five year old boy who has lived his entire life in a single room with his Ma. His Ma was kidnapped by a man called Old Nick, and has been locked in the room for 7 years. Jack is the result of Old Nick’s repeated rape of Ma. In order to try to give Jack as normal a life as possible, Ma lets Jack believe that there is nothing outside the room, that the room is the entire world, and everything on TV is make believe. However, Jack’s world is turned upside down when Ma plans for their escape. 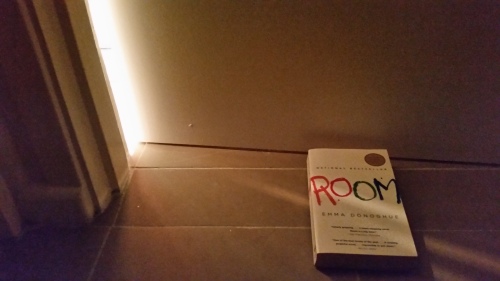 Donoghue is a very evocative writer. She does a great job of both capturing the innocence and unique perspective of a five year old, as well as the sinister and gritty theme of the book overall. She is particularly skilled at hinting at things that adults would pick up but the protagonist Jack can see but can’t understand. Although this is a book that is mostly about character development rather than plot, it’s paced well and has a really good sense of tension. Stylistically, the focus on the minutiae of daily life together with the naivete of the narrator is very clever.

I think this is a book that you only need to read once. The subject-matter is pretty intense and the story is very self-contained. This is probably deliberately done by the author, but the world in the book is so small that at times it feels quite suffocating. While this helps set the mood and build empathy, like “Trainspotter” or “A Clockwork Orange”, the novelty of the storytelling method can wear off. Now to see how the film holds up!