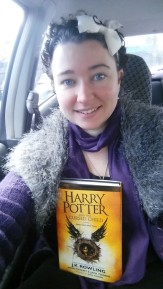 4 responses to “Harry Potter and the Cursed Child (No Spoilers)”