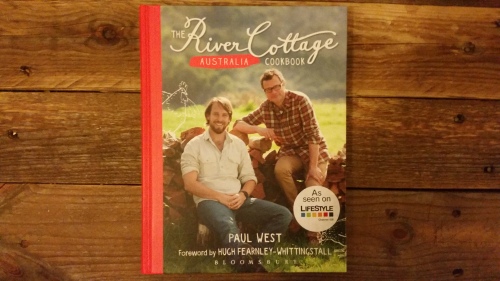 So, you can imagine my excitement when I saw that Paul West would be hosting the opening dinner for the inaugural Canberra Writers Festival. I watched the website for weeks and the second I saw the tickets go on sale, I pounced. When the night arrived, I was so excited that within about ten minutes of my arrival, I ambushed Paul West who was sitting unsuspecting at his table. He obligingly signed my cookbook for me, and we had a grand old chat, and it was an all-round amazing night. 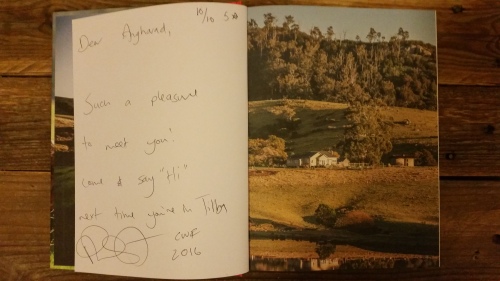 “The River Cottage Australia Cookbook” by Paul West is not the first book I’ve reviewed on this blog where I have tried to cook one of its recipes. However, it does have the honour of being the first cookbook. I really enjoy cooking, especially when it comes to trying new things. I’m not too bad at the basics, but I’m always looking for a new thing to try and new skills to develop and “The River Cottage Australia Cookbook” is perfect for that. The enthusiasm that Paul radiates on screen is palpable on the pages of this cookbook and he patiently but thoroughly steps the reader through vegetables & salads, fish, meat, bread, dairy and sweet things. Cookbooks aren’t like novels: one doesn’t simply read the entire thing cover to cover. Rather, you tend to flip through the book and see what takes your fancy. 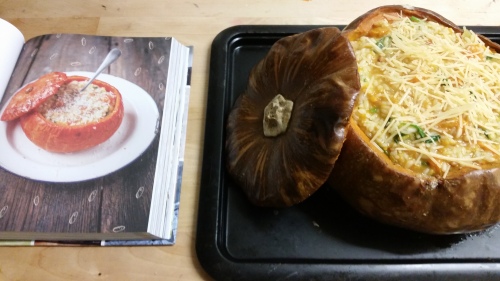 The first recipe to take my fancy was a pumpkin risotto served inside the shell of a roasted pumpkin. I’m not sure why, but I love the idea of food being used as a bowl for other food. Not being too shabby at risotto, I thought this one would be a good one to start off with. The people at the farmers markets I go to were very interested to know what I was doing with a whole pumpkin (golden nuggets not being available, I decided to take a pumpkin-as-tureen approach). The large pumpkin took a bit longer to cook, and I decided to green it up a bit with some baby spinach as well, but it turned out great and impressed my partner’s parents.

This is a gorgeous cookbook that brings to life the recipes and lifestyle that Paul West is such a proponent of on River Cottage Australia. The photography is stunning with gorgeous illustrated overlays and the recipes are simple enough that anyone could have a go, but unique and interesting enough that they’re not run of the mill. This book has its own distinct flavour, and I’m looking forward to giving some more of these dishes a crack.

One response to “The River Cottage Australia Cookbook”