This is a title you can’t walk past. I have to confess, when I first saw it in a bookstore some months ago I assumed that it was written by a man (the author’s name is Chris Kraus, after all). I also assumed that it was written recently. It was only when I received a copy courtesy of Harry Hartog that I realised that I was wrong on both counts. Recently republished in anticipation of the TV adaptation, this novel was actually originally published in 1997.

“I Love Dick” by Chris Kraus is an epistolary fictionalised memoir. Chris is an unsuccessful artist and film-maker living with her very successful academic husband Sylvère. After dinner with an acquaintance of Sylvère’s called Dick, the couple are invited to his home to stay the night. The connection Chris feels she has with Dick, and Dick’s surprising absence in the morning, lead to to Chris developing an overwhelming obsession for him. In the beginning, her husband is completely on board and tries to help tee up further conversations and meetings. Chris compulsively writes letters addressed to Dick that she doesn’t send, and she and Sylvère start to imagine the whole thing as a kind of art project. At some point, however, everything changes and Chris’ infatuation becomes a focal point for her own identity and a means of self-expression. 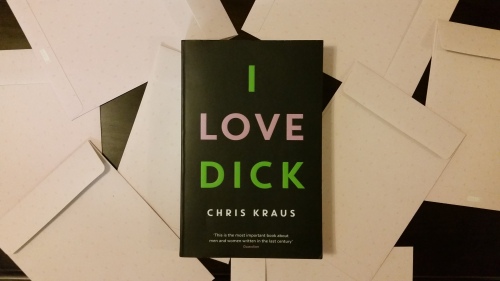 At its most shallow interpretation, this is a book about a woman’s ‘debasement’ through her romantic and sexual idolisation of a man who does not appear to reciprocate her feelings. However, it is in fact far a more complex book than that. At its heart, this is a book about a woman struggling with her identity in a world that demands women fit into stereotypes. Kraus draws on examples of other feminist artists and their critics, and unpacks the idea of female success, lingering on the idea of women being too this, and too that. Chris is shadowed by her husband’s success, and resentful of not being recognised for the much of the collaborative work they do, shining a light on female erasure. However, I think one of my favourite things about this book is the characterisation. Chris is impulsive, petty, confused, annoying, creepy, crazy and even at times revolting. Chris is a real person with all her strengths and her many failings. She’s not a seductress, a princess or a bitch. She’s awkward, she’s weird, she’s mercurial. Chris is a human, not a caricature. The point of the book isn’t to like Chris, but to get a glimpse into her humanity. However, I thought that the first half or so of the book was stronger than the second, and Kraus gets a little bit lost in her musings on the art world and mental health.

Even though it’s nearly 20 years old, I think this book has stood the test of time and still holds up today. It’s a bit thrilling to read a book with a title like this on the bus, but overall a very worthwhile read.

4 responses to “I Love Dick”