The Rest of Us Just Live Here

This book had caught my eye for a long while before I actually bought it. I’d seen it in two different editions: one with electric blue page edges, and one with sunflower yellow page edges. I’d ummed and aahed over buying it (I don’t read a lot of young adult fiction) but when I saw a copy with the blue edges on display one day at Beyond Q, I hesitated no longer. 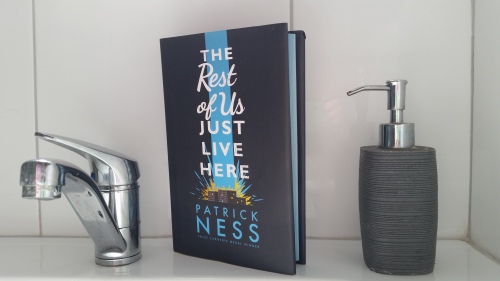 “The Rest of Us Just Live Here” by Patrick Ness is a somewhat satirical take on the young adult fiction genre. The story is told from the perspective of Mikey, a teenager in his final year of high school who is looking forward to going to prom and graduating with his friends Jarred and Henna, as well as his sister Mel. They’re all trying to live normal lives on the periphery of the “indie kids”; the protagonists in the constant battles against Immortals, or vampires, or zombies, or soul-eating ghosts. While indie kids are dying, mysterious blue lights are appearing and fissures into other dimensions are opening, Mikey’s just trying to sort out some of his own issues as the great expanse of adult life looms closer and closer.

This book was really refreshing. After having read many dystopian YA books in series like “the Hunger Games” and the “Divergent” series which are violent and serious and necessarily far removed from reality, it’s a nice change to read a book that pokes a bit of fun at the genre. I also really liked the way the author handles a variety of mental health issues and deals with sexuality in a modern, fluid and non-judgmental way. I also quite enjoyed the brief summary of the indie kids’ story at the beginning of every chapter which was then juxtaposed against Mikey’s much more mundane, everyday problems. Because let’s face it: coping with mental health issues, dealing with change and figuring out who you are – they are ALL everyday problems.

I think this would be a great book for teens aged 15 or 16 and over – especially those looking for a bit of a break from books that take themselves too seriously. 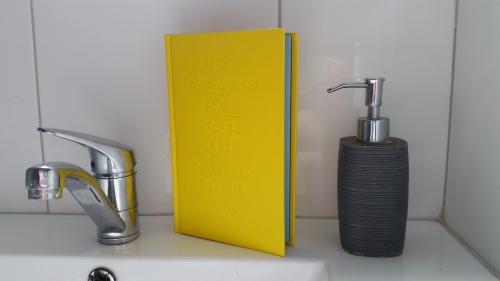 I took a second photo without the dust jacket because it’s just such a pretty book!

6 responses to “The Rest of Us Just Live Here”