I received a copy of this book courtesy of the publisher. I’m always eager to try out new takes on the fantasy genre, and I was looking forward to seeing what this was about. 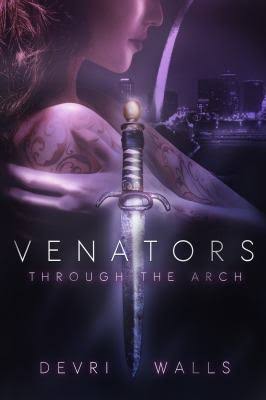 “Through the Arch” by Devri Walls is the first book in the “Venators” series. Rune Jenkins is a sporty young woman in her first year at university (college) with her twin brother Ryker. She studies hard and looks after her brother when he drinks too much, and tries to ignore the strange reaction she has whenever she sees anything supernatural. However, when she reaches out about her experiences to an old classmate, a reclusive young man named Grey, she finds herself pulled into a completely different world. Full of untold dangers and treachery, Rune and Grey must put everything they thought they knew about themselves and their lives aside if they want to survive.

This is a quintessential example of the young adult/fantasy genre. Walls weaves in classic elements of supernatural storytelling in with modern issues to create a compelling story. Dealing with questions of identity, confidence, child abuse and alcohol abuse, there is enough substance in this story to keep the reader hooked in both the human world and the world of magic. This is an extremely fast-paced story and Walls is an inventive writer who balances breakneck speed against striking imagery. Grey in particular is an appealing character who undergoes quite a lot of development throughout the book.

I think the only thing about this book that was a bit disappointing was the lack of diversity among the characters. Skin colour was mentioned a couple of times, but only regarding the rainbow skin tones of the magical beings. One man who was initially thought to have black skin in fact had blue skin, and another minor elf character with black skin was clearly not black black. I think after recently reading books like “The Fifth Season” and “The Rest of Us Just Live Here“, my baseline threshold for novel and diverse main characters has increased significantly.

Nevertheless, Wall has set the scene for a tense and complex fantasy series. There is enough new and enough familiar in this book to be appealing to any fan of young adult fiction, and I think it is definitely shaping up to be an epic trilogy.

2 responses to “Through the Arch”