I recently came across an article about the top 10 most challenged books in USA schools, and this book was ranked number 6. I bought a copy some time ago after I read my first John Green book. Obviously I couldn’t walk past it: it’s a stunning 10 year anniversary edition with a gold dust jacket and black tinted edges. It’s also got some commentary from the author and some deleted scenes as well. However, after sitting on my shelf for a while, I was finally inspired to give it a go. 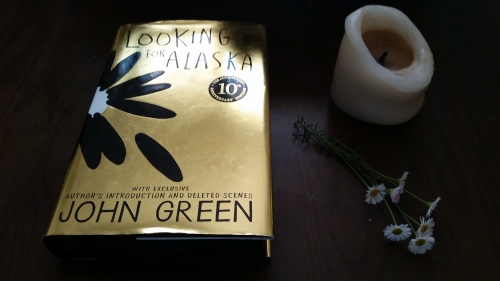 “Looking for Alaska” by John Green is a young adult novel about a teenager called Miles who moves to Alabama for boarding school. Leaving his beige and bullied existence behind, he is quickly taken under the wing of his roommate Chip, known as the Colonel. Chip immediately gives him the ironic nickname of Pudge, and Pudge meets the others in the group, Japanese-American boy Takumi and the beautiful and wild Alaska. Obsessed with people’s final words and finding meaning in life, Pudge left his home in search for a Great Perhaps, and starts to wonder if he just might find it in Alaska.

Although I am completely against book censorship, I can see why this book is so often challenged (though, personally, I think that “The Rest of Us Just Live Here” pushes more boundaries). Green writes candidly about sex, drinking and smoking and his characters are paradoxical in their dedication to schoolwork but opposition to authority. I think that for the most part, none of it was too problematic (though I did feel as though Green romanticises smoking in a way that doesn’t gel with 2017 values). I found the boarding school setting quite interesting. Having gone to a boarding school as a day student and seen what boarding schools are like, I did feel like the degree of free reign students had was a bit unrealistic. Apparently Green based it on his own boarding school experiences though, so I might well be wrong. Pudge is an interesting narrator who, like Charlie in “The Perks of Being a Wallflower“, is much more a follower than he is a leader. Happy to tag along at the heels of the charismatic Colonel and Alaska, Pudge is easily influenced by his new friends. However, his lack of either passion or much of a sense of righteousness, especially after he is the victim of a particularly intense hazing incident, ultimately set him apart.

This book was Green’s debut novel, and I think on balance it was a heartfelt and compelling bildungsroman. I did feel like maybe Pudge could have had a bit more character development than he did, rather than have an experience, but it’s hard to say how reliable a narrator he ultimately is – including about himself. I also felt like Alaska was a classic manic pixie dream girl, and it looks like I’m not alone. Green himself responded to criticisms about the way she was depicted, and while I think part of the point of the book is how much Pudge idealises her, I did feel a bit like her character wasn’t quite as three dimensional as she needed to be.

This is a quick and gripping read that while probably not the best in the genre, I think certainly would have been groundbreaking in its honesty about teenage life when it was first published. A book that at its heart is about what it means to be a good friend, I think it will stick with me for quite a while.

3 responses to “Looking For Alaska”