The Girl on the Train

I was in the mood for something fast-paced, and I had this book sitting on my shelf after I picked it up for an easy $2 from the Canberra Lifeline Bookfair. This book has gotten a lot of attention recently after being made into a film, and has been touted as the next “Gone Girl“. Would it match up to all the hype? 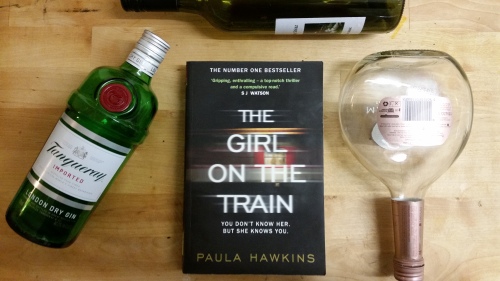 “The Girl on the Train” by Paula Hawkins is a thriller novel set just outside London, UK. Rachel, a thirty-something woman with a drinking problem, catches the same train to the city, morning and evening. While the rest of her life seems like it’s falling apart, she looks forward to that brief moment twice a day where she can watch a particular blissful couple she’s named Jess and Jason and daydream about their perfect lives. Until one day, Rachel sees something. Something that shatters her fantasy and pulls her back into a world she’s been desperately trying, and failing, to escape with alcohol.

This book starts out strong and kind of fizzles from there. I think there’s no other way about it. The premise of the fleeting glimpse from a train window is a compelling one, and the beginning seems really promising. However, it ends up being like one of those old time cartoons where the scene starts off beautifully illustrated and the further the character walks, the more unfinished the scene becomes until they end up just standing by themselves on a blank page looking admonishingly at the animator.

The characters end up being quite two dimensional (I think only one woman character out of four has a job). The men are kind of indistinguishable, and the amount that the women’s lives seem to revolve around the men is super boring.  Opportunities for interesting relationships and characters are lost (I’m looking at you, red-headed cockney train guy). The “twist” is easy to guess. Only one character has any kind of interesting backstory. Even the conversations end up being really repetitive because there’s never really any new information.

I could understand how “Gone Girl” was so popular – it was enthralling and it was an excellent example of the unreliable narrator. This book instead leaned heavily on the concept of unreliable memory and as a result the revelations just felt a lot more unlikely (or uninteresting).

A quick read but by no means an excellent read, this book is exactly OK.

Tagged as book reviews, books, paula hawkins, the girl on the train

5 responses to “The Girl on the Train”