This book was just what the doctor ordered. I started reading it while I was stuck in a car line to get into a festival in Oregon for 12 hours (no, I am not exaggerating) to help keep myself from losing my mind. I had heard about it after the author was last year named the first American ever to win the Man Booker prize. I was blown away by the novel’s beginning and I have a keen memory of sitting in that car seat shrieking every few pages. Then, after we finally made it into the festival and wasted a day moving campsites, the following night I became very ill and was tent-bound for two days. This book was my absolute solace. I needed an excellent book to get me through and when my eReader froze just as I started getting better, I almost lost it. 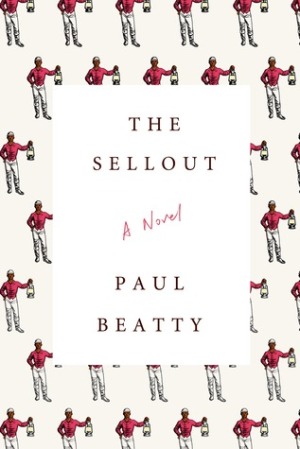 “The Sellout” by Paul Beatty is a satirical novel about race relations in the USA. The narrator, who is never given a first name, is a quiet young African American man who lives in a fictional Los Angeles town called Dickens. Despite wanting to live an understated life as a farmer, after he loses his father, an experimental sociologist who used his own son as a test subject, the narrator finally finds himself faced with the racial discrimination his father always lectured him about. However it is the final straw of Dickens’ erasure from the map that sets off a chain of events resulting in the narrator appearing before the USA Supreme Court accused of crimes against humanity.

This book, without a doubt, is the best book I have read this year so far. Beatty is an absolute master of the craft and every sentence in this book is full of double entendres, socio-political references and neologisms. I think my eyes were almost falling out of my head the entire time I was reading this, and it is definitely not a book that you can skim through. This book demands your full attention and the rewards are instantaneous. I don’t really want to say too much more about the plot because I really think it’s best to go cold, but it is really is exquisite in its audacity. However as outrageous as the premise is, as a modern social commentary it is bang on the mark and blistering in its honesty.

Although it has been some weeks since I finished it, I am still thinking about this book. It’s hard work, and I think that you have to be pretty up to date to get all the references (there were a couple that went over my head as a non-American), but it is a brilliant read. I truly think this is going to become a modern classic and I can’t wait until I can read it again for a second time.

6 responses to “The Sellout”