I have had a copy sitting on my shelf for goodness knows how long, but I’ve always been a bit reluctant to tackle it. After finishing my previous book during my five weeks of American literature that tackled race issues from a modern perspective, I felt like now was the time to balance it out with this classic. This book, for better or worse, has definitely become a fixture in American racial discourse. This review feels even more timely since seeing the documentary “I Am Not Your Negro” last night and seeing key players in the civil rights movement criticise one another through the lens of archetypes created by this book. Coincidentally, I ended up reading this book while staying in a tent cabin on the Idaho/Wyoming border. 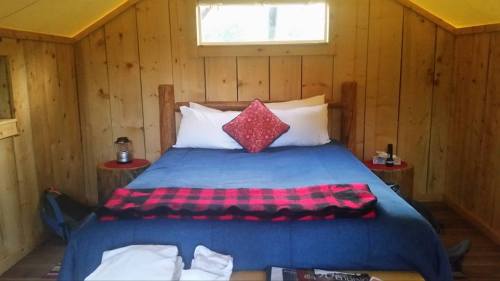 “Uncle Tom’s Cabin” by Harriet Beecher Stowe is a novel set in Kentucky, USA in the mid-1800s – a time when slavery was still legal. Arthur and Emily Shelby are slaveholders who, due to Mr Shelby’s financial mismanagement, are forced to sell two of their slaves. Arthur chooses faithful and responsible slave Tom and Harry, the five year old son of beautiful biracial Eliza, to the horror of his wife and son George. The story follows Tom down the Mississippi River to his new homes and explores the attitudes of the various white people who own him. Risking everything, Eliza runs away with her son Harry, hoping to meet his father (her husband) free in Canada.

There’s no other way about it. This book was an absolute slog. Beecher Stowe has this maddening, self-righteous tone that is exacerbated by the most omniscient of narrators. For some reason, she felt the need to announce at the end of each chapter that we were leaving particular characters to go see how the others were getting along as though she had made all these little dioramas and is taking us on a tour of them. Thematically, this book hasn’t aged well at all. Beecher Stowe interjects her correct interpretation that slavery is wrong with commentary on “the negro” and the kinds of emotional and intellectual characteristics to be expected from that ethnic group.

There is a lot of apologism for a number of the “kind” slaveholders, despite the fact that it was their own ineptitude, thoughtlessness and indifference that led to many of the predicaments in this book. Young George Shelby is touted as a hero, despite the fact that his family were slaveholders and the many benefits he received as a result. This book was surprisingly religious, and I found it interesting that Beecher Stowe relied heavily on Christianity as an argument in favour of abolition. A lot of her conclusions were ultimately pretty suspect, including the conclusion that the best solution for everyone would be if African Americans simply went back to Africa and be done with it.

This book can also claim responsibility for a lot of stereotypes that emerged after its publication for African American characters. There is the Uncle Tom: naive, loyal, virtuous and forgiving – never lifting a hand to defend himself. The Mammy:  overweight, nurturing, defers to white people but sassy to her underlings. The Tragic Mulatto. The list goes on and on.

“Uncle Tom’s Cabin” was so controversial at its time of publication that it has been credited with starting the American Civil War. How unpalatable it is now to the modern reader is a real testimony to just how horrific things were during slavery. I don’t think anyone could criticise this book for being inaccurate either with respect to details or attitudes of the time. I think that this book, while not excellently written or by any means socially flawless, is today a keen reminder of how far American has come and how far it has to go.