Woe to Live On

This is the third book I’ve read by this author. I really, really loved “Winter’s Bone” and “Give us a Kiss”, and this one had been sitting on my shelf for ages waiting for the right time. I borrowed it from a friend who had struggled to finish it, but I given how much I’d enjoyed his other books, I was certain I’d enjoy this one as well. This was my 9th book in my five weeks of American literature, and again, I forgot to take a photo of it. Instead, here’s a photo from an incredible lake I went to in Montana. 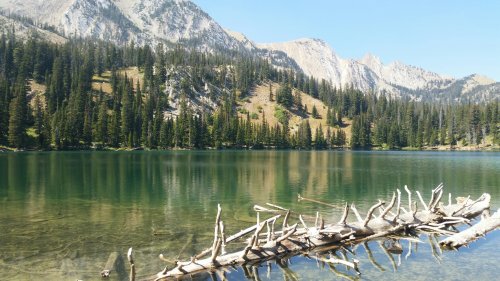 “Woe to Live On” by Daniel Woodrell is a historical fiction set during the American Civil War around the Kansas/Missouri border. The story is told from the perspective of 16 year old Jack Roedel, the son of Dutch immigrants who has joined his childhood friend Jack Bull Chiles in becoming a Bushwhacker. Due to his heritage, Jake isn’t liked by the other Bushwhackers, but his steely nerves and friendship with Jack Bull Chiles earn him first tolerance then begrudging respect amongst the men. However, as the war progresses, more men die and the violence perpetrated by the Bushwhackers becomes less about Southern values and more about personal gain. Left mostly to himself hiding out one winter, Jake becomes friends with another unliked but tolerated Bushwhacker: Daniel Holt, a free black man. As the season thaws, Jake begins to lose his taste for guerrilla warfare.

Some of the incredible things about the books of Woodrell’s I read prior to this one were his fearlessness in tackling complex social issues, his characters and his unflinching portrayal of pockets of America. So (and I don’t think it’s too much of a spoiler to say this) when I reached a point where I thought that it was maybe going to be an interracial gay romance set on the Southern side of the Civil War, I was so impressed at the bravery of this book. What a premise! What a literary gamble! However, it turns out that this it is in fact not an interracial gay romance. Instead it is much less groundbreaking exploration of the violence and wildness of young men, the futility and hypocrisy of war and the apparent temperance that a family and hearthside brings to one such hot-blooded man.

This is one of Woodrell’s earliest novels, and I think that his later ones are much better crafted. This one just didn’t have either the tension or the punch that I was expecting. While his writing is fine, the characters were pretty beige and despite all the horse-ridin’, gun-totin’, yee-hawin’ action – the plot was really much more of a gentle hill than any kind of great climax. There were so many times in this book I thought that Woodrell was going to take a risk and do something interesting with his characters but he never did. I think history buffs and people who are interested in the Civil War might get something out of this, but for the rest of you: forget this one and go straight for “Winter’s Bone”.

One response to “Woe to Live On”