I recently did a bit of a book swap with a colleague. I lent her “Skylarking” and she lent me this book. Unfortunately, I then promptly went away to America and it’s such a beautiful edition I didn’t want to chance ruining it or losing it overseas. It’s a beautiful hardcover edition, nicely understated with hints of red and gold in the slipcase and a really gorgeous texture to it. I finally managed to get around to reading it, and I think I probably liked her recommendation better than she liked mine. 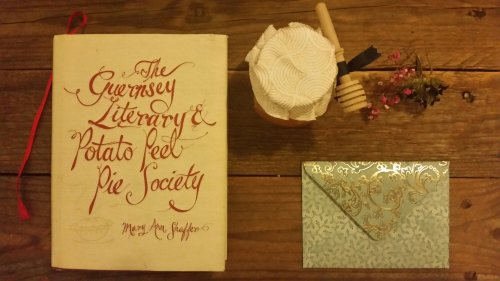 “The Guernsey Literary & Potato Peel Pie Society” is an epistolary historical fiction novel by Mary Ann Shaffer. This book is actually Shaffer’s only published work, and she died shortly before it was published. Her niece Annie Barrows, herself a published author, completed the final rewriting and editing of the manuscript. Although there is a wide cast of characters, the main is Juliet, a newspaper columnist who kept up witty commentary throughout World War II. After the war is over, she is struggling to decide what to do next when she receives a letter out of the blue from a man called Dawsey. Dawsey lives on the island of Guernsey, which had been occupied by Germany during the War, and had found a book inscribed with Juliet’s address. Fascinated by his story, and his membership with the mysterious Guernsey Literary & Potato Peel Society, begins corresponding with him and other members.

This is the first book in a while to make me laugh out loud. It has such a delightful beginning and is written in this very charming, British way that is simply captivating. I was surprised to find out the author is actually American because she  absolutely nailed that very exaggerated yet extremely polite style of humour. Juliet is a great character, and meeting the people of Guernsey through her eyes is just lovely. I think the only issue I found with this book is that it seemed to peter off a little towards the end. Maybe because the subject-matter started to get a little more serious. Maybe the relationship development felt a little rushed in one case. Maybe because Shaffer herself wasn’t able to do those final edits before publication – I’m not sure.

Either way, this was really a spirited, upbeat novel that was a wonderful change from some of the heavier books I’ve been reading lately.