About a year ago, my friend suggested that I check out a podcast called “Chat 10 Looks 3“. It’s a conversational show with media heavyweights and real life BFFs Annabel Crabb and Leigh Sales and I quickly became hooked. The fanbase of the show, who call themselves Chatters, have swelled in numbers and Crabb and Sales have started doing special live events around the country. My friend wangled me a ticket to one such event in Sydney and we drove up from Canberra to see the pair speak a few weeks ago. Both Sales and Crabb are published authors, and they had a number of books for sale (theirs and books by their own favourite authors) after the show. I bought one book by Sales, and one by Crabb, then lined up to get mine signed. Sales’ book is very small and very short, so it didn’t take long for me at all to get to reading it. 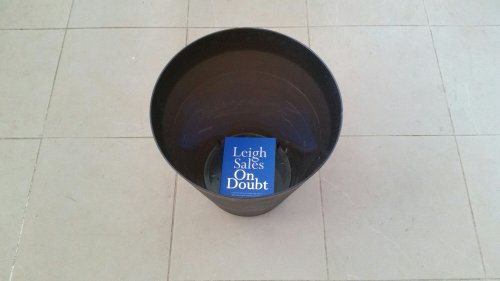 Disclaimer: I would never actually throw a book in the bin (I would either donate it or, at the very least, recycle it). Leigh Sales, however, has no sentimentality or qualms about getting rid of books once read and Annabel Crabb has taken to inscribing gift books to Sales with her personal address and mobile number just to make sure she doesn’t ditch them!

“On Doubt” by Leigh Sales is a short non-fiction personal essay about Sales’ observations on truth in politics and media as an Australian journalist. Originally published in 2009, this 2017 reprint includes a postscript about changes in media and politics in the past 8 years.

It is a quick read, and this is going to be a quick review because really there’s no excuse not to read this book yourself. It cost me $12.99 and you can buy the eBook version even cheaper. Sales investigates politicians who frequently make decisions based on gut feelings and instincts and the stigma and perception of weakness that is associated with those who doubt or are uncertain. For example, Victorian Premiere Daniel Andrews’ public admission that he changed his opinion about euthanasia was headline news because it is so unusual.

Opinions are increasingly being substituted for facts and the although the rise of the internet was expected to mean more information, it has in fact meant more platforms for people to voice mere opinions without being challenged. This book champions the courage it takes to tell the truth and the courage it takes for politicians and media magnates to admit when they are wrong, have made mistakes or have changed their mind. Sales has a clean, honest and matter-of-fact style of writing and makes her points both eloquently and succinctly.

In a world poisoned by fake news, alternative facts and baseless mantras like “everyone is entitled to their own opinion”, this book is the antidote we all desperately need right now.

9 responses to “On Doubt”