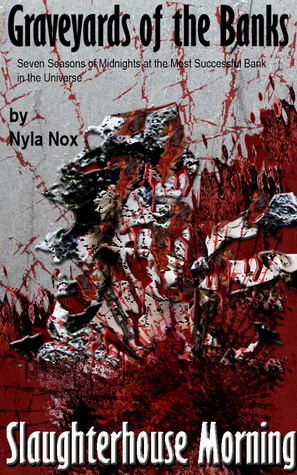 “Slaughterhouse Morning” by Nyla Nox is the third novel in the “Graveyards in the Banks” series about Nyla, a humanities graduate who is forced to work for the Most Successful Bank in the Universe to keep afloat in a hostile economy. Part satire, part thriller and part exposé, this book explores the dark corporate underbelly of the banking world and of those who are stuck working in it.

Generally speaking, I wouldn’t ordinarily jump into a series without having read the first books, but I was assured that you can read this book as a standalone and I largely agree. Without too much detail, the reader can extrapolate that despite her role in previous corporate restructures, Nyla has managed to keep her job at the bank. Working civilly alongside her ex, Nyla is instead focusing her energy on secret hotel liaisons with a high-flying businessman referred to only as the Bagman. However, with banking collapse looming on the horizon caused by people like the Bagman, Nyla’s job, relationship and future are all in jeopardy.

The author clearly draws on her own lived experiences evident in the detail of the workplace and the use of euphemisms in place of actual names. Nox has a clear, honest writing style and has unique and refreshing ways of describing people and their relationships. Admittedly, this is quite a long book, and there were times where the narrator’s description of the office environment and internal monologues about ethical dilemmas felt like they could have been abbreviated.

Nevertheless, this was an interesting book that gave a lot of insights into the politics, morality, conflict and insecurity of working on a temporary contract for a big business.

One response to “Slaughterhouse Morning”