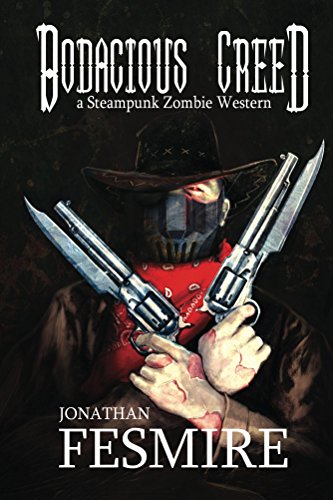 “Bodacious Creed: A Steampunk Zombie Western” by Jonathan Fesmire is exactly that: a steampunk, zombie western. The story is about US Marshal James Creed who arrives in 1876 Santa Cruz, California, USA to assist with a murder investigation. One of the most successful entrepreneurs in town is Anna Lynn Boyd, a former sex worker and brothel madam who has a secret profession: inventor. When Anna hears that Creed is in town, she swiftly tries to arrange a meeting to reconnect over a lost past. However, with the town rife with bounty hunters, a criminal underground, sex work politics, business deals and automatons, Anna’s plans go very awry.

This is a fun, action-packed novel with an interesting premise. Fesmire draws heavily on his hometown for inspiration for the book’s setting which brings a real sense of authenticity to the story (despite the steampunk zombie setting). I really liked the character of Anna, and most of the novel hangs on her genius and her compassion. The book deals with some complicated moral questions and the story is kept alive by the unresolved relationship between Anna and Creed. I don’t want to give too much away, but I really loved the coyote later on in the story.

I think the only thing that I found a bit challenging about this book was that the second half seemed quite long. The plot is both action-packed and convoluted and I felt like maybe a couple of the story lines could have been condensed.

Nevertheless, if you’re interested in dipping your toe into the wild world of steampunk, this is a great place to start.