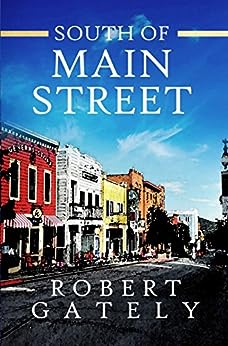 “South of Main Street” by Robert Gately is a novel about a man called Henry Wolff who is a little bit strange. Prone to treating the outside of his house like an obstacle course and making inappropriate jokes at inappropriate times, he often exasperates his two daughters. When his wealthy wife dies, the question of how Henry is going to be cared for and a court hearing about financial guardianship drives a wedge between the two sisters. However, Henry’s not too bothered by all that. In a town where Main Street divides the well-to-do from the struggling, Henry starts to spend more time with those who are often overlooked.

The simplicity of this story belies the complexity of themes that are explored. Gately addresses the pressures that domestic violence, mental health, trauma, addiction, homelessness, poverty and death place on families and sensitively explores the strange legal beast that is guardianship. By using Henry as the lens through which we perceive his motley group of friends, Gately is able to leverage the idea of simple kindness to build empathy for people who are often marginalised. I think that while perhaps this book doesn’t delve too deeply into the psychology and socioeconomic reasons behind disadvantage, it nevertheless is persuasive through its depiction of decency through human interactions. I also thought that the fraught relationship between Robin and Sharon, the two sisters, was one of the strongest and most engaging parts of the book.

This book is very much about the day-to-day, and some parts of the book are a little slower in pace than others. I think quite a few of the conversations between Henry, Dixie (who is addicted to drugs) and Danny (who struggles with his father’s alcoholism and feelings of abandonment by his mother) are some of the more difficult parts to get through. However, I think that because of these little run-of-the-mill encounters, the book is quite relateable to people who have family stresses but need to get on with their daily lives nonetheless.

An interesting story with a strong message, I think this book does a thorough job of bringing to light some important social issues.