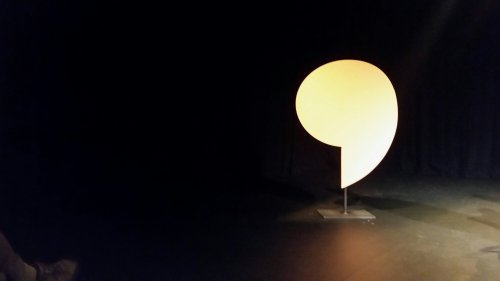 Academic Marcia Langton convened the panel which also featured journalist Stan Grant and playwright Nakkiah Lui. Before the panel even started, all three panelists were talking animatedly and it was pretty clear that this was going to be a very interesting mix of perspectives. Langton began by asking Lui about winning the Ethel Turner Prize for Young People’s Literature for her play “Black is the New White”. Lui said that she was ordering a baguette in France when she got the message that she had won. Langton asked whether she had pitched it like “Romeo and Juliet” and Lui said no, it was more like “Meet the Fockers”. She wanted to talk about race, class and love and make it funny.

Langton then asked Grant about his piece about his grandfather and equality in the latest edition of “Griffith Review”. The issue features predominantly Aboriginal and Torres Strait Islander writers which Grant said “punctures the lazy idea of homogeneity”. Grant launched straight into unpacking racism and said that at the heart of all conflict is a solitarist identity, and a history of grievances. He cautioned against the narrative of the “other”, because when identity is constructed that way, it ceases to be healthy.

The panelists discussed some examples of the way identity has been handled in Australia, including the Australia Day debate and, even though acknowledging that Sydney is NFL country, Adam Goodes. Grant said that Goodes was battling with ghosts, and said that he recognised that howl of humiliation – he’d seen it in his dad who was locked up and beaten, and his grandfather who was tied like a dog to a tree. He said that he remembered a time when he felt like “there was no other place for us except for the outskirts of town”. Even though Adam Goodes is considered an assimilated man, Grant said that he was still torn between not belonging and paying a price.

Lui asked whether racism is a choice, and if it is, how do you dismantle that? Grant said that everyone is damned by the discourse of race. He referred to a concept called racecraft, the idea that race and racism are fictional constructs which people imbue with meaning. He said that people are discriminated against not because of colour, but because of the meaning that people have decided to attribute to that colour. However, Grant said that Australia has thus far been lazy about deconstructing racism.

Lui said that she had never thought of herself as Aboriginal until someone called her Aboriginal. She quipped that she writes black characters because she wants to give them jobs. Lui noted that nobody ever asks how white a person is or discusses a white playwright and how they handled whiteness. She stressed that various identities don’t have to be in conflict.

Grant said that when he lived overseas, it was the first time he was considered Australian unencumbered. He said that the race war in Australia has a different shape to other countries, and asked the question about how Aboriginal people can reach their full humanity. He said that agency is not administered. The panelists discussed the Census, and that the Aboriginal and Torres Strait Islander box doesn’t capture the nuance of identity.

Grant said that you can’t put identity into a box when you opt out of administration and noted that people often can’t handle when Aboriginal people don’t fit in the boxes they have been assigned. People would think, “you can’t really be Aboriginal if you were a journalist in Beijing”. He said that his kids are experiencing the same thing now. They are in a private school that gives scholarships to Aboriginal children, but the school doesn’t know how to handle them because they are also Aboriginal but are not in need of scholarships. The panelists agreed that there is a perception that if you are too successful, you can’t be Aboriginal.

Langton talked briefly about tension between the recent protests about the “Stolenwealth Games” and the traditional owners who poured their heart and soul into the Welcome to Country. Lui said that we don’t talk about the diversity of blackness. She said that it’s her prerogative as a writer to have people see the humanity in Aboriginal people and she said that she wants people to care about Aboriginal people. They all noted that history is the struggle for recognition.

Grant said that Western civilisation is the jailer who slips you the key. He noted that Thomas Jefferson signed the document, but was a holder of slaves. Jefferson held society to a standard that he couldn’t meet himself. Grant cautioned that democracy is in retreat, and is society is turning away from academia and expertise. He said that we must jealously guard the principles of democracy.

The panel talked about how Malcolm Turnbull rejected the Uluru Statement from the Heart, a true expression of democracy. They also discussed the section 44 citizenship crisis in Parliament, and agreed that section 44 of the Constitution would likely be amended before recognition. The panel noted that there is a play in section 44, but Lui said she didn’t think any play could possibly beat the drama of real life when it comes to the citizenship crisis.

The panelists noted that democracy is a game of numbers, and Aboriginal and Torres Strait Islander people don’t have the numbers because of genocide. Grant said that we must be more sophisticated in how we apply democracies, and that despite what Turnbull may say, group rights actually strengthen democracy. He listed unions, political parties, electorates and even States as examples of group rights.

Lui again said that she just wants people to see the humanity of Aboriginal people. She told a heartbreaking story about her grandmother whose house had termites. The house wasn’t fixed by the housing commission, and her grandmother fell through the floor one day and died. Lui wrote this story into her play “Kill the Messenger” and said that you can frame experience around loss. However she worries that history becomes culture, and she really wants to see Aboriginal people stepping out of that narrative and instead on bikes eating baguettes.

The panel reflected on the idea that a nation is founded on what we forget as well as what we remember. They prompted us to consider not just what is a nation, but why a nation. Grant referred to Michal Bilewicz’s concept of politics, dividing participants into two groups with the following characteristics:

The panel noted that Aboriginal people have not used violence to gain rights but have used legality and generosity. This was a brilliant panel with three very different but complementary points of view. Although I didn’t quote much of what she said, Langton was an excellent facilitator who drew two very different voices together. This was a highly intellectual and nuanced discussion, and as soon as Sydney Writers’ Festival releases the recording, you should definitely have a listen.