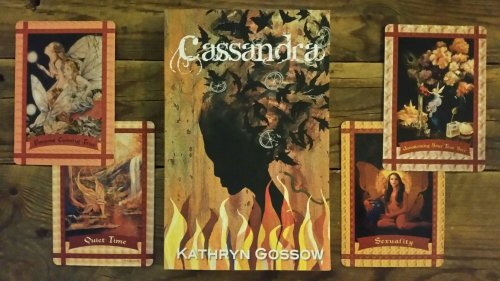 “Cassandra” by Kathryn Gossow is a young adult fantasy novel about a teenager called Cassie who lives on a rural property in Queensland in the 1980s. She often has visions of the future, but they are so fragmented and unpredictable that nobody believes her. Nobody, until she makes friends with her new neighbour Athena. Isolated at school and frustrated with her family, especially her younger brother Alex whose weather predictions have led their family to prosperity, Cassie is thrilled to have a friend like Athena. Even if Athena asks her to keep their friendship a secret. However, Cassie’s visions keep telling her that things are going to go wrong and as she grows more and more disturbed by them, everything eventually does.

This is a compelling story that fuses the familiar story of an outcast teenager with the story of Cassandra, a figure in Greek mythology. While they might seem an unlikely mix, the issues that Cassie deals with like fickle friendships, first crushes, experimentation, mental illness, aging family members and tense relationships with her parents and brother are cast in relief by her inability to properly control her visions of the future. I really liked the way that Cassie’s visions are so neatly woven into the remainder of the story. I also really liked how the book darkened into a real Australian gothic story. I don’t usually like books that are quite so bleak, but I appreciated Gossow’s sense of realism, especially in the scenes where Cassie attends a party with other teenagers.

I think the part of this book that I had the most trouble with was the character of Athena. Without giving away too much of the story, I felt like I would have liked Athena to either be a little more true to her namesake when it came to her friendship with Cassie or to have simply not been named Athena at all. I felt like out of all the hardships and heartbreak that Cassie went through in this story, Athena’s gradual then ultimate betrayal was the only one I couldn’t connect with. Athena was a bit of an enigma. Highly intellectual, Cassie feels a blend of admiration and envy for her, and she is presented for the most part as being perfect. However, I couldn’t quite understand how dispassionately she treats Cassie both as a friend and as an experiment.

This is a very thought-provoking book that explores a range of issues including adolescence, agrarianism and even immigration. After I finished it, I felt almost as haunted as Cassie.