This is a book that I have been meaning to buy for a long, long time. I’m a pretty big fan of graphic novels in most genres, but I really enjoy the perspective that you get from non-fiction graphic novel and this one is meant to be one of the best. I finally picked up a copy with a gift card I got for my birthday this year. 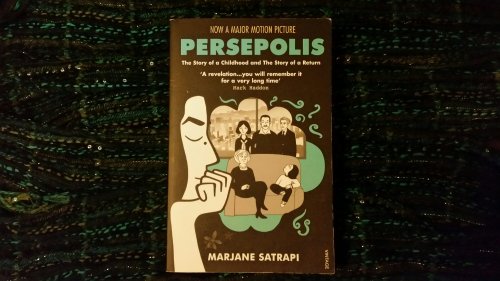 “Persepolis” by Marjane Satrapi is a graphic autobiography about Marji’s experiences growing up in Iran during and after the Islamic Revolution. Marji’s parents, politically active and reasonably well-to-do, protest tirelessly against the regime of the last Iranian monarch, the Shah. However, when fundamentalists seize power, Marji’s family publicly acquiesce to the new and frequently changing laws while they watch friends and family around them suffer under the brutal new regime. Living an educated and liberal life at home, but forced to wear a veil and be submissive in public, Marji starts to chafe against the double life she lives. Her parents decide to send her overseas to live and continue her education in Austria. However, when she arrives, Marji’s expectations and the reality of a new country and culture seem worlds apart.

This is a fascinating take on a part of recent history that before reading this, I knew nothing about. The black and white artwork is very understated which allows the dialogue and the narration to take the forefront of the story. However, Satrapi’s creativity really shines through when young Marji is imagining the things that she doesn’t always see herself but hears about from her family, the news and her friends. I thought another particular strength was the way that Satrapi depicted Marji’s deteriorating mental and physical health during here time in Austria, and the overwhelming challenges of navigating another country as a teenager with no support.

I think probably the only thing that was a bit challenging as a reader of this book is that unlike most graphic novels, this one takes much longer to read. Part of that is the complex and heavy subject matter, but part of it is that the subtly of the artwork is quite demanding and the images are a bit hard to distinguish between sometimes. This means that it takes a lot of concentration to interpret what is going on in each page.

This is a challenging but incredibly important graphic novel, and if you would like to learn more about the diverse history of Iran, this is a really great place to begin.