This book was part of either a Christmas present or birthday present (I can’t quite remember) that I finally got around to reading. I hadn’t heard a lot about this particular story, but the author’s previous novel “The Dry” received a lot of acclaim so I was keen to see what all the fuss was about. 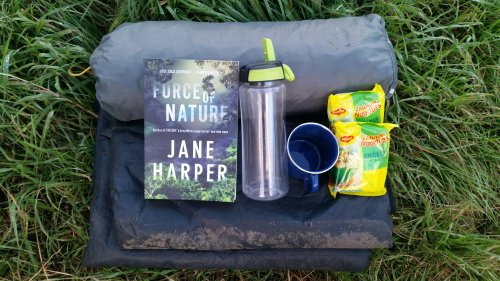 “Force of Nature” by Jane Harper is a crime thriller about a corporate bonding activity gone wrong. Five women the same company go on a weekend hike together in a fictional Australian mountain range.  Chairwoman Jill, senior staff Alice and Lauren, Bree and her twin sister Bethany. However, when only four return at the end of the weekend, a full-scale search is launched with police, emergency services and volunteers to find missing Alice. Federal Police Agent Aaron Falk arrives at the ranges to assist with the search, but he has a particular interest in Alice’s welfare. She’s a key informant in an investigation he’s conducting, and the story that she was separated from the others suddenly isn’t sounding so convincing.

The first thing to say about this book is that it is actually kind of a sequel to “The Dry” (which I didn’t realise) and although I think it is OK as a standalone novel, there are some character-building aspects to Aaron that I felt like I missed out on a bit started from this book. Nevertheless, Harper does an admirable job of immersing the reader in the wilderness, and I particularly enjoyed how she used torrential rain to set the mood throughout the book. I also liked how she connected the events in the present with Aaron’s past.

However, I found the premise of this book so unbelievable that I simply couldn’t settle into it the entire way through. First of all, no corporate team-building company would ever leave five inexperienced hikers in the wilderness without a radio or a satellite phone for a weekend. It was just completely unrealistic that any company would be insured for that kind of activity without an emergency plan. If someone fell and broke their neck, there was absolutely no mechanism for them to call for help. Basically they had to get from point A to point B, and if they didn’t after 3 days, then the company would come looking for them. The man who runs the Executive Adventures program, Ian Chase, just seems so bumbling and incompetent compared to the incredibly organised and safety-focused people I have met who run programs like Outward Bound in real life. The fact that there was simply no contingency plan really made the premise difficult for me to accept, and unfortunately this ended up tainting the rest of the story.

I can see what Harper was trying to do in exploring the intricacies of female work, family and friend relationships by putting five women in a high-stress situation. This book definitely passes the Beshdel Test. I particularly liked Alice’s backstory and discovering more about what was going on in her personal life. However, Lauren’s and the twins’ stories felt a bit more clunky, and Jill just didn’t really get a fair shake of the stick. Ultimately I was much less interested in the catty, shallow behaviour of the women and far more interested in Aaron’s story, which (not having read the preceding book) was possibly the point.

Ultimately, this book didn’t grip me in the way one wants to be gripped by a thriller. A title like “Force of Nature” is a big one to live up to, and at the end of the day, I would have liked something a bit more hard-hitting, gritty and deep. I did like Aaron quite a lot though, and I am tempted to go and give “The Dry” a crack.

4 responses to “Force of Nature”