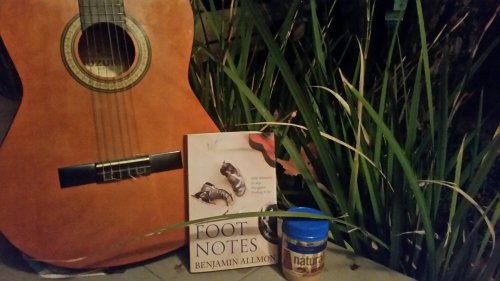 “Foot Notes” by Benjamin Allmon is a memoir about a last ditch attempt to make it as a musician. Ben records an album, renames himself Smokey and sets on a 1,000km trek from Queensland to Sydney. Smokey sets out full of confidence that he’ll be able to sell albums, walk the whole way and sleep rough without any dramas. However, it quickly becomes clear that his expectations about weather, terrain, performing and even his audience were not even close to reality.

This was a really interesting read about a pretty extraordinary journey. Allmon’s experience walks a line between pilgrimage and homelessness. The only assets he has are his guitar and CDs to sell. He has no tent, no cash and no support aside from friendly strangers he meets along the way. I’ve driven up and down the Princes Highway between Sydney and the Gold Coast more times than I can count, along that hellish road between those north coast towns. A lot of the places Allmon walked through were places that I had visited. Beautiful coastal scenery and towns that are plagued with unemployment. On foot, Allmon observes far more than I ever have out the window of my white sedan on cruise control. More importantly, he observes his own responses to the people that he meets. Elitism is a hard trait to maintain when you’re sleeping under a plastic garbage bag on the beach. I think one of the most important parts about this book is Allmon finding himself through finding his audience.

When reviewing a memoir, it’s always tricky to critique the book without critiquing the author’s experiences. I think that Allmon wrote an incredibly honest story, and for the most part it was pared down to the most interesting and dramatic parts. I think where I really enjoyed Smokey’s interactions with the locals (flora and fauna included), I was a bit lost during some of the passages where Smokey is overcoming physical and emotional hardship. I think the pragmatist in me was very frustrated by scenes such as the crossing of “the Sahara”. I felt like many obstacles could have been avoided with a bit of preparation, and so I think I wasn’t quite as willing to come to the party about how meaningful overcoming them was.

Ultimately though, this book was a pleasant surprise. I would recommend it to anyone who feels like the pursuit of their dreams is getting a bit stale, or anyone who wants to get a good look at life on the north coast through a fresh pair of eyes.