I received an advance reading copy of this book courtesy of Harry Hartog.

“Frankenstein in Baghdad” by Ahmed Saadawi is a horror novel that puts a modern spin on Mary Shelley’s “Frankenstein” by reimagining the creation of the monster shortly after the US invasion of Iraq. The story is set in a neighbourhood in Baghdad, the capital city of Iraq, where an old woman called Elishva lives alone waiting for her son Daniel (whom everyone, including her daughters, believes is dead) to return home. She has two rather unsavoury neighbours: Faraj and Hadi. Faraj, a real estate agent, hopes to buy Elishva’s large, historical and largely undamaged home. Hadi, a junk dealer, hopes to buy her vast collection of antiques. While waiting for Elishva to finally give up her possessions, Hadi has been engaging in a strange compulsion to collect body parts after the many explosions in Baghdad. When the enormous corpse goes missing, up-and-coming journalist Mahmoud investigates the escalating violence and strange murders that start occurring in the city.

This book started out very intriguingly with a report from a mysterious committee that makes recommendations in relation to the activities of the Tracking and Pursuit Department and the arrest of an author who had prepared a 250 page story. The book then starts from there. Thematically, this was an incredibly interesting story that uses the corpse made up of disparate body parts as a shrewd metaphor for the war in Iraq. Saadawi presents a scathing look at the way war becomes self-sustaining through corruption, greed, revenge and desensitisation. Mahmoud provides an interesting perspective as a character who straddles ethical and unethical journalism. Jonathan Wright’s translation from the Arabic feels smooth and nuanced.

However, I struggled with some parts of this book. There were very few female characters in this novel and the women who were featured seemed to fall within the tropes of crazy cat lady, ice queen and replacement love interest. None of the women have much agency or personality, and even the violence in the streets and due to bombing mostly focuses on men being killed. This is also partly a horror novel, and while the symbolism behind the corpse is very strong, the mechanics of how he gains and sustains life are very disturbing. I think I probably found the chapters with Mahmoud the least engaging. Despite the fact that there was probably a good reason for his story being largely separate from the corpse’s antics in Elishva’s neighbourhood, every time the story returned to him it felt jarring and dull.

Anyway, this isn’t an easy topic or an easy book, but as my ARC wasn’t a complete copy (which I didn’t realise until I reached the end), I was hooked enough to buy an eBook version and finish the last few dozen pages on my eReader. This is my first Iraqi novel, and it was a vivid and visceral insight into the impact of the war on a city. 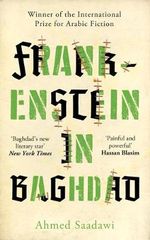 One response to “Frankenstein in Baghdad”