The Black Tides of Heaven

It was my turn to pick a book for my feminist fantasy book club, and after we’d read quite a few lengthy stories, I decided to go for a novella. I checked out the shortlists from the 2018 Hugo Awards, and this book looked the most interesting.

“The Black Tides of Heaven” by JY Yang is a fantasy novella, is the first in a trilogy of silkpunk novellas called the “Tensorate” series. It begins with twins Mokoya and Akeha, children of the Protector, who grow up in the Grand Monastery in the Protectorate after given away by their mother as newborns to settle a debt. Raised genderfree like all children of the Protectorate, the twins are especially close. However, as their gifts develop, the reach adulthood and politics shift, the twins find that their once unbreakable bond pulled to its limits.

This is a really interesting novella with a setting that I absolutely adored. The magic system, the Slack, was intriguing and the twins were a great way to explore the limits of different kinds of powers. The premise of children being raised genderfree was really interesting as well, as well as the ability for children to affirm their gender as adults.  Yang has a sparse but compelling style of writing and it was so refreshing to read fantasy set somewhere that wasn’t based on medieval Europe. I was so excited to cook some themed food for my book club, and I scoured the novella for references to food and built the menu around that.

I think, however, that this is one of the very rare times that I felt like the book was too short. Not too short in that it ended abruptly, but too short in the way a piano accordion is short when compressed and there’s a lot that’s folded away out of sight. The story ranges from the twins’ birth to their adulthood, but it skips along so quickly that it did feel a little hard to get invested in the characters. Yang clearly has a lot in mind for their world the Tensorate, and I think that there was enough to this book that they could go back and beef it up with more characterisation and worldbuilding.

I would also like to say something about pronouns. I’ve reviewed a couple of books that use gender-neutral pronouns like “Ancillary Justice” and “The Left Hand of Darkness“. In the former, Leckie uses she to refer to everyone, and in the latter le Guin uses he. Yang uses they, which I have seen used and used myself online and in my personal life. However, there were a couple of moments where the meaning wasn’t immediately clear from context whether Yang was referring to one twin in a gender-neutral singular, or whether Yang was referring to both twins with a plural. The English language is, unfortunately, very clunky when it comes to pronouns. I’m not sure what the solution is, but I’m almost wondering, especially in a book set in a world inspired by cultures in Asia, whether or not it might have been better to just abandon English pronouns altogether and pick a pronoun from a language that already has gender neutral pronoun. Indonesian, for example, uses the pronoun dia for everyone regardless of gender.

Anyway, this was an interesting and creative story that I felt could have been easily expanded into a full novel. If you’re looking for fantasy that isn’t a rehash of Tolkein, this is a good place to start and I’m keen to read more of Yang’s work. 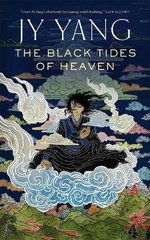 4 responses to “The Black Tides of Heaven”