“Surrogate: A Novel” by Tracy Crisp is a story about a young nurse called Rachael who is asked to house-sit by a doctor from her hospital that she is loosely acquainted with. Dr Cate and her handsome husband Drum have plans to adopt a baby overseas. However when things don’t work out and they return home early, they first ask Rachael to stay and then the ask her to consider a much, much bigger proposition.

This is an evocative and unsettling story that explores the issue of surrogacy by pushing the boundaries of relationships. Crisp is a thoughtful writer who captures the day to day lives of Rachael, who is going through the confusing process of surrogacy, and her mother Mary, who went through something similar as a young woman. I thought Crisp’s real strength was exploring imperfect relationships and the reasons why people keep secrets from one another. The interplay between Cate, Rachael and Drum was particularly engaging.

I think probably the only thing I struggled with in this story was the role of Mick. Mick is Rachael’s father’s best friend, and Rachael is infatuated with him, but I just didn’t quite see how this part fit into the rest of the story. Mick seems to be a bit of a bridge between Mary’s past and Rachael’s present, but I’m not sure the foundations are quite strong enough to hold up that particular plot-line.

Anyway, this is an interesting novel that deeply explores the theme of giving up a child through the lens of ordinary people. 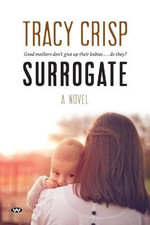 3 responses to “Surrogate: A Novel”