Quintessential historical fiction about the Tudors

Earlier this year I had grand plans to participate in the Man Booker 50 Challenge to celebrate 50 years of one of the world’s most prestigious literary prizes. I was going to try to read as many Man Booker Prize winners as I could by the deadline to go into the running for tickets to the Golden Man Booker Prize award night in the UK. Anyway, although I picked up a bunch of previous winners, I only managed to read one in time. The others stayed on my bookshelf, waiting for the right opportunity, and when I went on holiday recently I decided to take this one with me.

“Wolf Hall” by Hilary Mantel is a historical fiction novel about self-made man Thomas Cromwell and his role in the court of Henry VIII. The story begins with Cromwell as a young boy in a dysfunctional family at the turn of the 16th century. The novel progresses in fits and starts and follows Cromwell’s rise to power and fortune as a lawyer, entrepreneur, moneylender and confidant to England’s most powerful people.

Given the popularity of books about the Tudors, I think it’s safe to say that this is the book about the Tudors. Mantel has an incredibly immersive and detailed style of writing, and transports the reader directly into the grand halls of Henry XXIII’s kingdom. She writes in first person which makes you almost feel like the story is happening in real time. She unravels the genius of Cromwell’s mind, and weaves a story of subtlety, opportunity and shifting alliances. I really enjoyed the depiction of Anne Boleyn, and incremental trade of intimacies between herself and the king.

I think probably the only thing that I struggled with is just the enormous amount of politics. I find reading about political intrigue a bit of a challenge at the best of times, and it’s a testimony to how good this book is that I managed to get through most of it pretty easily. However, considering this a book built almost completely on political history, occasionally it does feel a little bit relentless.

Anyway, this is one of those books that I feel absolutely did deserve a Booker Prize, and if you’re a fan of Tudor history this is the book for you. 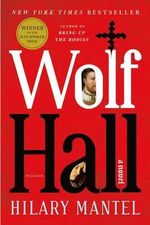