(Adults Only) The Veiled Woman

A friend of mine has been introducing me to some feminist classics recently and bought me a copy of this book. I of course had heard of the author, probably most memorably through Jewel’s track “Morning Song“, which actually would be quite a nice accompaniment to this book. However, I have never read any of her work before, so again, thank you Kendall for continuing to expand my literary horizons.

The interesting thing about this book is that although it is without a doubt intended to be erotic, it is incredibly literary. Nin writes with a delicate subtlety, relying on suggestion and inference to quickly build tension. Three of the stories are told from the perspective of women and one from the perspective of a man. The stories are quite playful, some with an unexpected twist or turn. Nin explores lesbian sex (Mandra), anonymous sex (Linda), voyeurism (Marianne) and power play, often placing one (or more) woman in a position of control and highlighting the strength and importance of female sexual desire. The stories were originally written in the 1940s and Nin without a doubt can be credited as a trailblazer for women in this genre. All of the encounters are very much consensual and the women are all very active participants.

It is a bit hard to critique erotica because it is a genre, like horror, that is designed to elicit a particular response. I think something can be well-written, but not necessarily good erotica, or vice versa. Of course, there is plenty of erotica out there that is poorly written and bad erotica (which, interestingly, seems to be awarded almost exclusively to men – though reading and writing erotica is of course very gendered). Although Nin is clearly an exceptional writer, and although these stories are obviously intended to be erotica, Nin lingers on the social detail of the stories and like your average novel, sex seems to be almost more a part of the story rather than the point. I think any erotic story needs to be a balance of the physical and the psychological. Nin’s stories in this collection perhaps teeter a little far on the side of psychological and could have done with a bit more lingering on the physical.

A book that was certainly incredibly risque for its time with exceptional writing, what it perhaps lacks in sexiness it definitely makes up for in compelling characters and scenarios. A very short book that is worth a read just for the historical value. 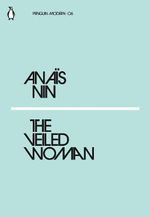 4 responses to “(Adults Only) The Veiled Woman”