Intergenerational Chinese family drama about mothers and their daughters

This is one of those modern classics that I had never gotten around to reading. I think I picked up a copy at the Canberra Lifeline Book Fair , gathering dust, waiting for me to read it. Well, with the end of the year looming and me not nearly close enough to my 80th book, its slender spine beckoned and finally it was this book’s turn.

“The Joy Luck Club” by Amy Tan is an intergererational family drama about four Chinese mothers and four of their daughters. Jing-Mei, An-Mei, Lindo and Ying-Ying all found their way to San Francisco in the 1940s and became close yet competitive friends over mahjong, food and gossip. However, while the mothers hold on to many of the old ways while keeping elements of their pasts secret, they have each become disconnected from their daughters who have been raised American. The books is divided into four parts, two of which focus on the mothers’ stories and two of which focus on the daughters’.

This is a rich story for such a short book. There is a real need for diverse stories, and Tan does an excellent job of taking eight women from similar backgrounds and showing just how diverse their experiences can be. I particularly enjoyed reading about the transition from traditional life as young women to being mothers in a new country.

It is a difficult task to conjure eight unique voices, and for the most part I think that Tan achieves it. However, because it is quite a short story and the point of view characters change so quickly, it was a little hard to keep track of who was who. Part of that difficulty is that the mothers themselves all changed quite a lot from when they were young and there weren’t always obvious connections between their past and present selves.

An important novel on the migrant experience, that is full of depth if occasionally a little muddy. 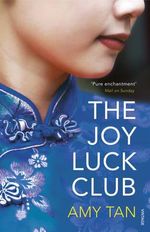 2 responses to “The Joy Luck Club”