As the pressure to reach my reading goal of 80 books for 2018 started to grow, I continued to raid my shelves for some of my shorter books and I came across this one. Although it’s a children’s classic, I must admit I had never read it (though I had seen the animated film many times). I figured it was probably about time I gave it a read.

“Charlotte’s Web” by E. B. White is a children’s book about a piglet who is the runt of the litter at the Arable family’s farm. Saved from premature slaughter by daughter Fern, she names him Wilbur and hand rears him. Once he is big enough, he moves to her uncle Zuckerman’s farm to be fattened up. Feeling very lonely, Wilbur tries without success to befriend the other animals and is then shocked to learn that he is to be slaughtered. However, when he meets a very clever spider, his future does not look so grim after all.

This is a talking animal story that explores themes of life, death, friendship and tolerance. White intersperses dialogue and plot with whimsical depictions of life on a farm and the effects of changing seasons on the landscape. I think that in an increasingly urbanised world, a story like this would have brought some of the realities of a farm to children who have only ever known cities. Charlotte is of course the highlight of the book, and her no-nonsense attitude and keen strategic mind is the key to Wilbur’s survival.

However, there were some things that irked me about this book. Wilbur is a pretty helpless character who is constantly falling to pieces in the face of adversity. Yes, his trajectory is pretty bleak, but he doesn’t do much to help himself either and relies completely on Charlotte’s generosity of time (exhausting her in the process). I wasn’t entirely happy with Fern either. She’s an 8 year old girl, and her mother worries that she’s spending too much time playing on the farm (?) and not enough time thinking about boys (???). Her mother seeks advice from a doctor and is reassured that she’ll start thinking about boys soon instead of frolicking on the farm. However, then when the doctor asks about her brother Avery, Mrs Arable laughs and says that he’s fine because he’s busy getting into poison ivy and catching frogs.

I just felt a bit that in this book, the male characters were free to make their own destinies, but the female characters seemed to just exist to conform and facilitate the male destinies. I thought that the animated film, made less than 20 years after the release of the book, remained very true to the story but depicted Fern as a young teen (the voice actor was 14). I felt that Fern’s transition from girlhood to young adult was much more appropriate in the film, Charlotte was a little softer and Wilbur was far less annoying.

Regardless of how women’s equality has changed since publication, this book remains a children’s classic and I’m sure if I had read it as a child, I would have enjoyed it. 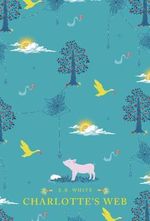