About a year ago, I found out that one of my favourite authors was retelling British folklore. I was excited then, and I was just as excited a couple of months ago when I saw that she had released a second book in a similar theme. Just as pretty, with a deep blue hardcover and nautical imagery in silver detail, I knew I had to have it.

“The Blue Salt Road” by Joanne M. Harris is a fantasy novella about a young man of the Grey Seal clan, the most playful of the selkies, and he the wildest of them all. Tempted by the adventure of walking among the Folk who live on land, he casts off his seal skin one night at the call of a red-haired lass. After meeting her under the moonlight several times, the young man is tricked, his sealskin stolen and his memories gone. With no memory of his former life, the young man must try to make the best of a new life thrust upon him. However, when he is asked to do the unthinkable and with no knowledge of how to return to his home, the young man soon finds himself with nowhere to go.

This book made me a lot more uneasy than her previous one in this collection. I think part of it was that the story of a man tricking a woman to be with him is so pervasive, but the story of a woman tricking a man to be with her is much less common. For some reason, men pursuing women by any means is normalised but women pursuing men by any means feels wrong. Without going into spoilers, the ending made me even more uneasy. I felt that Harris explored an interesting motive behind the red-haired woman’s actions, but ultimately I found the successive breaches of trust a bit hard to deal with. I get that Harris is going for a dark interpretation, but I there was something about the ending left me much more unsettled than the previous one.

A beautifully rendered story with a hint of bitterness, Harris challenges our understanding of gender through this traditional tale. 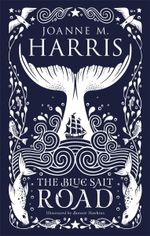 4 responses to “The Blue Salt Road”