I first read this author when I was 18 years old after his book “Cloud Atlas” was recommended to me by someone I was seeing at the time. I have been slowly getting to some of his other books, though his manuscript for the Future Library project is something I will probably never get to read. Anyway, I was getting to the pointy end of my 2018 reading challenge, and this book was short and sitting on my shelf so I decided it was time to read it.

“Slade House” by David Mitchell is a horror novel set in the UK. It begins in 1979 with a teenage boy called Nathan who is dragged along by his mother to an exclusive event at a manor called Slade House. After some difficulty finding the address, and after Nathan taking some valium, they eventually find the iron door in an alleyway and make their way into the manor’s garden. Things don’t seem so bad and Nathan befriends another teen called Jonah. However, when things start becoming a little strange, Nathan finds himself unable to leave. 9 years later, a divorced police officer is investigating Slade House and disappearances that are associated with the mysterious address. 9 years later after that, a shy member of a supernatural club goes to a party at Slade House. Will the cycle continue, or will someone be able to break the circuit and see through the illusion?

This book was genuinely terrifying. I was about halfway through, in the chapter Oink Oink, and my heart was positively racing. Mitchell has a real flair for getting inside the head of a diverse cast of characters, and for conjuring empathy in his readers. Each point of view character is isolated in their own way, and Mitchell shows us that courage comes from unexpected places and to never underestimate people based on their appearance. Mitchell is also an expert in layering stories and each chapter builds on and elaborates the former, bringing the true horror of the story to the fore.

I actually don’t have much more to say about this book except that if you’re looking for a well-written and extremely unsettling horror story, look no further. 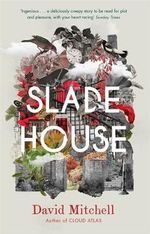