I’ve mentioned a few times that I’m part of a feminist fantasy book club, and for our first meeting of the year, this was our set book. Unfortunately I was running a little late and forgot to take photos of the wonderful Greek feast one of our members made, but I did read the book.

“The Song of Achilles” by Madeline Miller is a fantasy retelling of the Greek myth of Achilles. The story is told from the perspective of Patroclus, a disgraced prince who is banished to the kingdom of Peleus after a terrible accident. Although initially isolated and lonely, Patroclus is soon befriended by Peleus’ godlike son Achilles. As the boys grow up together, under the tutelage of the centaur Chiron, they form an inseparable bond. However, increasingly determined to fulfill his destiny as the greatest warrior of all time, Achilles is drawn into a war that will put their love to the test.

The first half of this book was brilliant. Miller brought a unique and romantic perspective to this classic myth and a sense of realism to the characters of Patroclus and Achilles. I especially loved the dreamy and idyllic chapters in Chiron’s home where the two boys could explore their feelings for each other and their own hopes and dreams for the future without interference from the outside world. I thought that Miller did a good job of exploring Patroclus’ feelings of inadequacy juxtaposed against Achilles’ sense of entitlement, and the first half of the book was extremely engaging.

However, the second half of the book, when the young men go off to the Trojan war, I found to be a lot more difficult to get through. It wasn’t quite so obvious for the first half of the book, but for the second half it becomes abundantly clear that Patroclus didn’t actually have any purpose or work apart from being with Achilles. It was very late in the book that he started taking an interest in healing, which made him quite a frustrating point of view character up until that point. Also, I completely understand that according to the mythology Achilles spends 10 years fighting the Trojan war, but even though it only took up a couple of hundred pages in the book, the war part really seemed to drag on. I did appreciate that the war camp turned into its own ecosystem, but it just seemed a bit relentless that 10 years would pass with so little happening.

Anyway, an excellent example of direct queer representation that was a bit slow-going plot-wise at times. 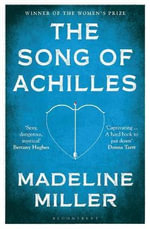 One response to “The Song of Achilles”