The Kingdom of Copper

Warning: this review contains spoilers for the previous book “The City of Brass”

You may recall that I reviewed the first book in this series last year and I absolutely waxed lyrical about it. I was absolutely desperate to read the next book, and when it came out a few months ago my friend very kindly picked up a beautiful hardcover and gave it to me when I saw him over the summer.

“The Kingdom of Copper” by S. A. Chakraborty is the second book in “The Daevabad Trilogy” and picks up approximately five years after the events of the previous book. After marrying Prince Muntadhir, Nahri’s freedom has been significantly curtailed. Only allowed in the Palace and the infirmary, and with no plans to have a child any time soon, Nahri is starting to chafe at the bit. However when she discovers an abandoned Nahid hospital, she starts a new scheme: to rebuild some of her ancestor’s lost legacy. Exiled by his father from Daevabad for treason, Ali soon finds himself in Am Gezira, his ancestral lands. Although starting to gain control of his strange new marid powers and settling into his new home, Ali is soon called back to his home. Hoping to make a swift exit to avoid his father and brother and return to his warriors and work rejuvenating the desert landscape, it soon becomes clear that Ali is not going anywhere until Navasatem: a once in a lifetime celebration.

It’s always a tough publication schedule to produce a book in a year, but Chakraborty has absolutely delivered. I really appreciated the time interval between this and the previous book. Chakraborty didn’t waste time on empty years, she just summarised the highlights and went for it. In the last book, I think one of the things I struggled with a little was the worldbuilding and the complexity of the different races and terms. However in this book, a bit more of the story is told outside the city of Daevabad and some of the things that were confusing start to make a bit more sense. I really enjoyed the character development and the difference you can see that five years has made to the characters. Still not quite the legendary healer her mother was, Nahri has become a lot more competent and Ali, previously hot-headed and righteous, has become far more strategic. The writing is excellent, and I was thoroughly immersed the whole way through.

This book is quite dense, and there is a lot going on plot-wise. Where the first book in the series felt like it was indelibly marked on my mind, I felt like there were parts of this book that slipped through my fingers a little. I think that although overall it was an excellent story, and certainly much better than your average second book, but I’m not sure it had as many fiery scenes that left the same long-lasting impression as the first book.

Anyway, I think this is my favourite adult fantasy series out right now and I absolutely cannot wait for the third book. 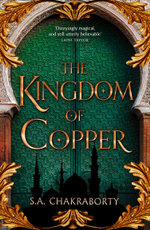 Tagged as book reviews, books, fantasy, s a chakraborty, the daevabad trilogy, the kingdom of copper

One response to “The Kingdom of Copper”