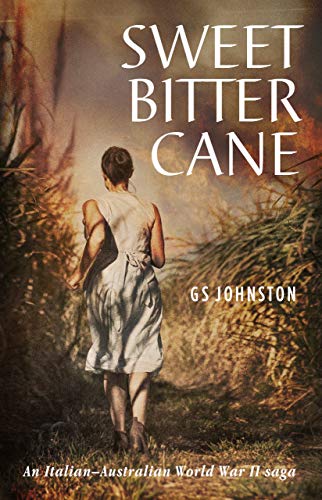 “Sweet Bitter Cane” by G S Johnson is a family saga about a young woman called Amelia who, after a wedding with a stand-in for the groom in Italy, moves to Queensland to meet her new husband Italo and support him in growing sugarcane. Although young, Amelia is smart and resilient and soon overcomes her language barriers and finds her place managing the financial side of the farm. However, haunted by a connection she has with her neighbour’s son Fergus and increasingly isolated by her social and political choices, when the war breaks out and Italians are targeted, the secrets and nationalist pride Amelia harboured to keep herself safe suddenly threaten to destroy everything her family has built.

This is an epic story that traces the life of a young woman on the cusp of adulthood who leaves everything she knows behind to start a new life in a country that largely doesn’t welcome her. Johnson does an admirable job of setting the geographic and political scene of a seemingly hostile new life and has a particular flair for character development. Amelia hardens as the story progresses, and it’s unusual (and refreshing!) to see such an evolution of a character while still retaining the essence of who she is. Johnson isn’t afraid to explore Amelia’s mistakes to their full consequences and her flaws and poor choices juxtaposed against her successes make her all the more relatable. The internment of Italians during WWII is another forgotten pocket of Australian history, and Johnson written a nuanced account of something that truly happened to people living here.

For the most part, I was impressed at how Johnson told Amelia’s story but one thing that I was perplexed about throughout the book was the appeal of Fergus. While Amelia’s character remained interesting and engaging throughout the novel, I wasn’t always on board with her relationships and how she managed them, and most particularly so the connection she had with Fergus. Although for the most part the pacing of the novel was good, I did feel at times that some of the writing was a little too descriptive and could have been condensed a little more.

Regardless, this is an interesting and important story about the experience of women during a period of Australian history rarely discussed.