Me Too – Stories from the Australian Movement

18 months ago, a storm hit Twitter under the simple and otherwise innocuous hashtag #MeToo. Originally a means to highlight the prevalence of sexual harassment and sexual assault that women experience, particularly in the workplace. As more and more women shared their experiences, and as the movement grew and evolved, and controversy after controversy has emerged, questions have arisen about the purpose and the extent of the movement. I certainly have a lot of questions about the implications and limitations of #MeToo, so when I was invited to come see editor Miriam Sved and contributor Ginger Gorman discuss the new book “#MeToo: Stories from the Australia movement” at Muse Canberra with HerCanberra associate editor Emma Macdonald, I was very eager to hear what they had to say. 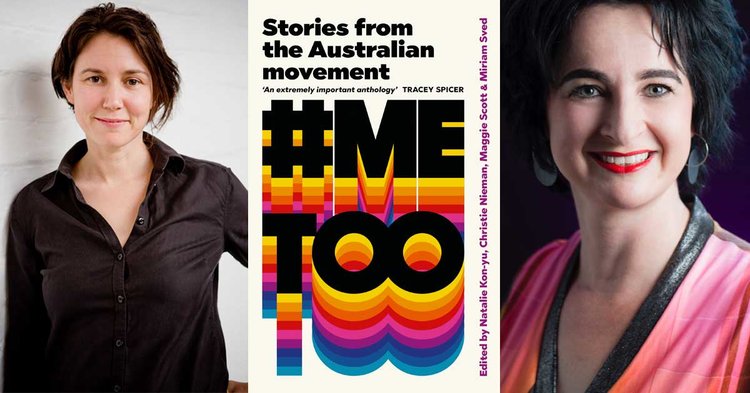 Macdonald kicked off the conversation by asking where Sved and Gorman were when #metoo happened. Sved said that she recalled being impressed, awed and horrified. She said that she was not an online discloser, and it did scare her seeing so many people putting their personal trauma out there. She said that she did not participate, noting that as a fiction writer she prefers to hide behind stories, but could see that it was a watershed of relief for many people. Gorman said that as a Twitter junkie, she had been glued to the phenomenon. She said that the media industry is rife with sexual harassment, and #metoo was the first time she had ever written down her own experiences being sexually harassed by a senior colleague in the workplace. She said that at the time, she recalls a lot of people worrying that their experience wasn’t as bad or didn’t count. Macdonald said that she is a private person, but she felt that she couldn’t keep it inside. She said that she made an oblique post, but remembers feeling a sense of relief and that she wasn’t alone.

Macdonald then asked Sved about the how the anthology came about. Sved said that she had read so many fascinating experiences online, and that they had published two anthologies previously, but they still worried about whether or not they were the right people to do it. However, eventually they figured that someone should. Noting that many of the narratives so far had been from predominately rich, white Hollywood celebrities, they wanted this book to include more diverse voices. They decided to approach it with a public call for pitches across different forums to get some different perspectives from different industries. Sved acknowledged that there had been a real focus on the media, and Gorman noted that it was the media that had the platform to share the stories. They discussed how ubiquitous harassment seems to be in nursing, and how it is an open secret.

Macdonald noted how nuanced the book was and said that while nothing was shocking to her, it all hurt. She mentioned a particular contributor Sylvie Leber whose story of being violently raped really stayed with her. Sved said that her story was powerfully disturbing, and they had to include it. She said that they didn’t want to say that people were “only” sexually harassed in comparison, but that it was a challenge to represent the whole spectrum.

Gorman noted that there is an overlap between #metoo and predator trolling. She said that cyberhate costs $3.7 billion to the economy, and while both men and women are targeted, the type of harassment women receive is different. She said that women are more likely to experience doxing, violent threats and intimate image abuse, and that the harassment is far more sexualised and violent. She said that it is all indicative of coercive control, and it is real life men trying to do harm because they are angry and believe feminism is to blame.

Macdonald asked whether they thought men are more predisposed to this kind of harassment. Gorman said that she felt that it was cultural rather than innate. She said that one woman in her book who had been stalked, harassed and threatened said that men hate her because she is talking about things that they would usually talk about, and they perceive that as her taking up their space. Macdonald noted that there seems to be a theme of anger, and Sved said that editing the book was enlightening and alarming. She said that there are silos of people who are silenced and disempowered. She said that things like trolling, harassment and domestic violence are considered private and something that women should police themselves. She said that the reality is that these things exist in plain sight.

A member of the audience took the opportunity to ask a question about anger, and whether or not it is leading to change. Gorman said that she believes you cannot solve hate with hate. She said that while researching her book on trolling, she formed friendships with some of these people. She said that you can be angry, but ultimately she didn’t want to hurt them back. She said that she instead used something she calls radical empathy – going in and listening, learning why someone behaves like that and why they hate women so much. She said that while anger is a motivator, ultimately it is destructive and polarising. Sved said that she swings between pessimism and optimism. She said that organisationally, there can be changes and attention can be brought to the right people. However, she said that there was a problem with reaching women broadly, and that she felt that the broader focus should be on empowering women. She said that in a time where there is a lot of job insecurity, and when people prioritise jobs so much, it can be hard to either speak up about things or even get the support to speak up.

Gorman raised the point that as a result of #metoo, some people have lost their jobs and there have been some instances of social justice. Macdonald raised the issue of Geoffrey Rush’s defamation case, and how the outcome of that has been damaging to the #metoo movement. She also noted that not everyone shared the same views about #metoo, and that Australian author Helen Garner, who she described as “tough”, had advocated an approach of “kicking him in the nuts“. Macdonald said that that approach doesn’t take into account power dynamics, expectations of politeness, embarrassment or fright. Sved said that she felt that the Garner question pits women against each other generationally.

Gorman said that when her experience happened, she was 21 years old and a man massaged her shoulders uninvited in the workplace and told her “that necklace looks good on you. You know what else would look good on you? Me.” She said that she told her managers, and they said that he does that to everyone, and that the man was later appointed the sexual harassment officer. Sved said that women are socialised not to make a fuss, and Gorman agreed that there is an understanding that women who make a fuss don’t last long in the workplace.

Macdonald asked whether they thought that structural change is happening, and if not, how do we move it forward. She acknowledged that there had been similar movements before, such as by Anne Summers. Sved said that she felt that there had been some structural changes, and that there had been some traction through social media. She said that in the book, there is a graphic narrative that is quite pedagogical which essentially states that alone, nobody can change anything and that most of us do not have the luxury of making sweeping changes, but that everyone can make small changes in their own world. Sved asserted that we still need sweeping legal and industrial relations changes. Gorman said that there has to be nuance. She said that there had been calls for movements for partners, for all women including trans women, and for supporting those around you. She talked about the issue of bystander bullying and the strategies of amplification, like women in the Obama administration, and the technique of using polite, corrective speech to help combat trolls. She says that she retweets other women and helps to enforce polite social norms.

An audience member asked the panelists a question about whether they thought that the public sector was better than the private sector for women’s safety. Sved said that she felt that at the heart of all these problems are structural issues, and that even academia, which is considered to be “family friendly”, there are has equality issues. Sved invited people to simply look at how much unpaid care work women still do. Gorman said that in workplaces, she has been bullied and harassed mostly by women. She said that she feels that often women feel like they have to fight over scraps of power and behave like the archetypes of 1950s men. She said that giving other women a break can be seen as soft.

However, Macdonald said that New Zealand Prime Minister Jacinta Ardern does suggest that there is hope. Gorman said that a man she had spoken to who was part of the incel movement, who didn’t agree to being in her book, said after a year of speaking to her that he doesn’t hate women any more. Sved pointed out that the movement was originally started by a woman who was exploring human connection, and was co-opted by toxic masculinity and became all about whose fault it is. Gorman said that hatred wouldn’t be online unless it was already in society.

Another audience member asked a question about whether men who engage in sexual harassment behaviour really understand how it affects women. Gorman said that she felt that often they don’t. Gorman referred to a “This American Life” podcast episode about a woman who tries to discuss catcalling with the men who are catcalling her, and how the men genuinely did not seem to understand the impact it had on women.

I managed to ask the last question, and I wanted to go where I felt like the conversation hadn’t quite gone yet: has #metoo gone too far? I shared an example of someone I knew who had been publicly accused on social media of sexually assaulting a woman, someone I was certain hadn’t done what he was accused of. I also acknowledged that there is a deficit in the legal system, and that the difficulty in getting a conviction for a sexual assault in court can explain why people would seek justice elsewhere such as via social media. I asked the panel what they thought about the interaction between #metoo and the role of the legal system.

The panel agreed that social media is not really equipped to prosecute individual cases, and discussed grey areas like Geoffrey Rush’s alleged conduct and the anonymous article published about a date with Aziz Ansari. They agreed that there is a need for law reform, and reforms in the workplace. However, they said that they did not feel that #metoo had gone too far because the purpose of #metoo is to facilitate structural change and that in that regard, there is still a long way to go.

The discussion was wrapped up there but if you want to find out more about the movement, people’s experiences and its limitations, you can check out the book yourself.

2 responses to “Me Too – Stories from the Australian Movement”