Classic literature about a young woman living with depression

This is a book that really doesn’t need an introduction. To be honest, I’m not entirely certain where I found my copy. It has no price on it. It’s a 2005 edition so the pages are starting to yellow a little but it’s in good condition. Maybe I found it in my street library, or someone else’s. I’ve had it sitting on my to-read shelf for a long time and, look, I’m not going to lie, I picked it up and put it down a few times, but eventually I managed to settle into it. 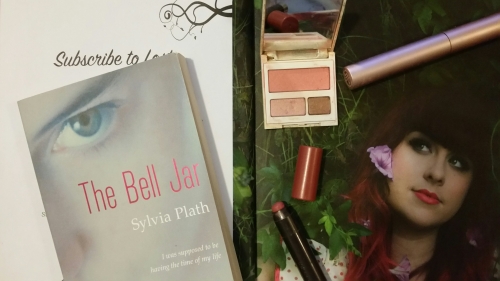 The backdrop of this photo is from Issue 1 of Lost Magazine, unfortunately no longer in print. The photographer of the model is Simon Tubey.

“The Bell Jar” by Sylvia Plath is a novel about Esther, a university student in her late teens who wins a prestigious summer internship in New York with a group of eleven other young women. From a lower middle-class family in Boston, it’s the opportunity of a lifetime for Esther. However, up close, the lifestyle isn’t as glamorous as she anticipated. When her run of winning scholarships and opportunities suddenly runs dry, Esther’s mental state plummets and after attempting suicide she is admitted to a psychiatric ward.

It’s difficult to read this book entirely as fiction given that Plath herself died after committing suicide shortly after its publication. It is beautifully written and over 50 years after publication is still refreshing in its frankness. There is a brilliant scene early in the book where after attending a very fancy function, the entire contingent falls ill with food poisoning. It sounds a bit trite to say, but this book reads like it must have been far ahead of its time. Plath is scathing about how meaningless the work at the magazine is, and depicts the way Esther’s cynicism begins to bleed into everything and how she fails to find meaning in her life in nothing short of a brilliant way. I also thought that Plath’s description of life in a psychiatric ward, and the experimental and harmful treatments from the time that Esther is put through, was both horrifying and very well done.

When reading books that were written long ago, I always get the strange feeling that nothing and everything is different. There were certainly plenty of observations that Plath made about sex, sexism, the commodification of beauty and class that still hold true today. However, one of the most difficult things about reading older books is seeing the way that race – even indirectly – was handled. There are quite a few instances where Esther compares her own appearance unfavourably towards people of different ethnicities or describes a person of colour’s appearance in a stereotyped way, and honestly, it is jarring when it happens. I also wasn’t super happy with how Joan, Esther’s boyfriend’s ex-girlfriend who is also a lesbian, was handled. And yes, yes, I know that people are a product of their times, but that doesn’t make people intrinsically right and ideas and attitudes, no matter how reflective of the time they were expressed in, can never be immune to criticism.

This is a short, sharp novel that is an illuminating snapshot of the time and still, to this day, has a lot to say about mental health, gender equality and class. It is difficult to separate the book from the author’s own life, but it does stand on its own and remains a cutting and raw exposé of life as a young woman struggling with mental illness and straddling a class divide.

7 responses to “The Bell Jar”