This book wasn’t my first choice and it didn’t have a particularly auspicious beginning. In my one and only attempt at a blind date with a book, at a bookstore with the punny name Hooked on Books which has long since closed in the coastal town Batemans Bay, I found myself unhappily with a book that was fourth in a series that had not read. Now, I appreciate that the point of a blind date with a book is that you get a book wrapped in brown paper and have no idea what might be inside. However, I didn’t really think it was in the spirit of the exercise to wrap a book that you needed to have read the first three in the series to appreciate. Anyway, I reluctantly asked to swap, and they reluctantly agreed, and I walked away with this book. It sat on my bookshelf half unwrapped for three years, and when I found myself with a second Flanagan book on my to-read pile, I thought it was about time I read the first. 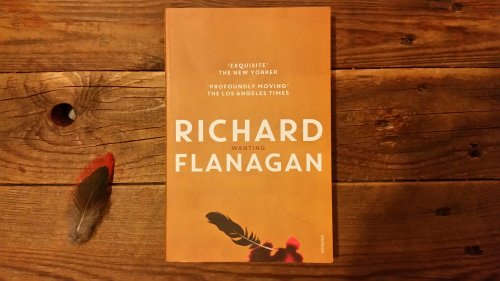 “Wanting” by Richard Flanagan is a historical fiction novel about the explorer Sir John Franklin and his wife Lady Jane Franklin, his stint as Lieutenant-Governor of Van Diemen’s Land and the cultural impact of his disappearance while on an arctic expedition. The book mostly splits between the story of Mathinna, an Aboriginal girl adopted then soon after abandoned by the Franklins, and Charles Dickens’ involvement in a play inspired by Sir Franklin’s disappearance. The two stories are connected not only by the Franklins, but by the theme of desire.

I really liked the beginning of this novel. The Protector is a fantastic character in his abhorrence and Flanagan’s sense of dramatic irony is second to none. I felt like it was a strong start and Flanagan captured the brutality, the indifference and the arbitrariness of colonisation and the devastating impact it had on the Aboriginal people of Tasmania. Flanagan is a strong writer and brings to life the terrible contrast between the increasing affluence of the white settlers, and the increasing desolation of the indigenous population.

The beginning was good, but there were so many things that irked me about this book. The juxtaposition between Dickens’ chapters and Mathinna’s chapters was jarring. I can see what Flanagan was trying to do, but I just don’t think it got there. Neither Dickens nor Franklin were compelling enough characters and I honestly eye-rolled my entire way through each of Dickens’ chapters. Mathinna was much more compelling, but I was very unhappy with the way that she was handled. Her story was told as a tragedy, and instead of giving her any agency at all, Flanagan depicts her as a victim subjected to horrific (and, in my opinion, largely unnecessary) violence.

This actually isn’t the first book I have read about the Franklins and Mathinna, and a lot of the criticisms I had about that book, I am going to echo again here. I just don’t think that the story of what happened to the original people of Tasmania needs to be bolstered by shoehorning in figures from the British literary scene of the 1800s. I wish that Flanagan had just excised the entire Dickens story and had stuck with Tasmania. The Franklins weren’t that interesting, and I wasn’t sure that cutting Franklin’s daughter Eleanor out was particularly strategic either because that was a missed opportunity for exploring the family’s interaction with Mathinna.

Anyway, I think that Mathinna’s story needs to be told and that someone, probably one of the incredible Aboriginal writers being published at the moment, needs to do it justice.