Urban fantasy about amnesia and a secret society

This was a set book for my feminist fantasy book club. It is getting a lot of attention recently because it is being adapted into a TV series. We mostly read books written by women, but this author is an Australian man who wrote this book from the perspective of a woman. 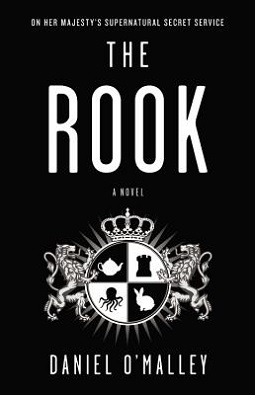 “The Rook” by Daniel O’Malley is an urban fantasy novel based in London about Myfanwy, a young woman who wakes up with no memory. When she finds a letter in her jacket pocket to herself from herself, she discovers that she works for a secret agency as a high ranking administrator and that someone is trying to kill her. As she follows the trail her former self left her, Myfanwy is faced with a decision: start a new life, or solve the mystery of her old life.

This is a fun, fantasy/superhero take on the classic spy thriller genre. O’Malley brings bureaucracy to life and explores the concept of how a government could possibly handle ongoing and wildly variable threats of a supernatural variety. O’Malley is a spirited writer and largely this is an easy book to read. It actually reminded me a lot of Brent Weeks’ “The Night Angel Trilogy“, both in style and in the concept of some of the antagonists. O’Malley pushes human bodies and human wills to their limits in a similar way.

Prior to meeting with the rest of my book club, I had been taking notes on my phone, which I won’t quote here because it is way too full of spoilers, about things that bothered me about this book. There were numerous things. First of all, as someone with a Welsh name that your average Australian struggles to say, I was absolutely aghast that O’Malley made the decision to suggest that Myfanwy pronounces her name “Miffany”. What? WHAT?! No. Unacceptable. If you want to call your character Miffany: fine. Do that. But to deliberately mangle a Welsh name is completely out of order and I refused to think of her name as anything other than Myfanwy the entire time reading this book.

I could see what he was doing, but I did feel at times that O’Malley was trying to be diverse and global while writing this book, but sometimes it just did not work. For example, at one point he refers flippantly to “sunning herself on some balcony in Borneo”. Borneo, for those playing at home, is not a country; it is an enormous island shared by three countries: Indonesia, Malaysia and Brunei. I won’t go in detail to the lack of high-rises, the proportion of rainforest, the humidity or the conservative clothing culture. However, O’Malley made a few off-hand remarks about far away places and advantages that some races have to using powers, and it fell a bit flat.

I think that the biggest problem I had with this book was the exposition. So. Much. Exposition. In my notes I wrote “this book is 60% exposition”. The structure of the book is primarily an alternation between Myfanwy’s current thoughts, and the letters that past Myfanwy has left her to read explaining her job and how things work. While this is a perfectly acceptable way to structure the novel, despite supposedly differing significantly in personality, the two Myfanwys are almost indistinguishable in voice. Past Myfanwy also spends most of her time writing at length about different aspects of the Checquy (pronounced mystifyingly and annoyingly as Sheck-Eh). I appreciate O’Malley’s worldbuilding, I do, but there has to be a balance between giving your readers enough information to understand your world and actually propelling the story along.

I think that this book is probably very appealing to a lot of people, and I foresee that the TV series is going to be very popular. It annoyed me on a lot of levels, but it was readable enough and novel enough to get me through.

3 responses to “The Rook”