And the Ocean Was Our Sky

I forgot to mention in my previous review that another major reason for me finally reading “Moby Dick” is that a friend of mine had lent me a copy of this book. I’ve read several of Patrick Ness‘ books before and I was very much looking forward to this one, but it didn’t seem right to try to read it before reading the story it is inspired by. Luckily for me, this one is much shorter. 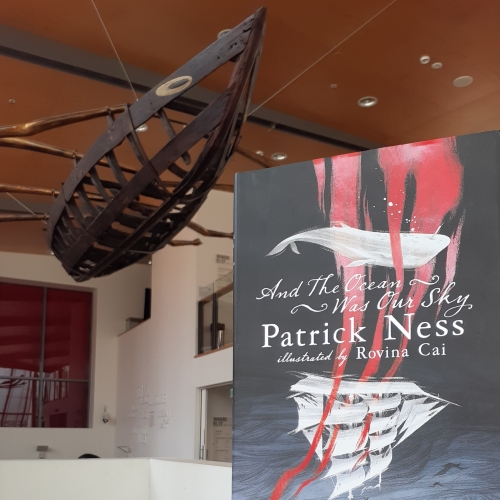 “And the Ocean Was Our Sky” by Patrick Ness and illustrated by Rovina Cai is an illustrated young adult novel that reimagines the classic novel “Moby Dick” by Herman Melville as told from the perspective of a whale. Narrated by a whale who styles herself as Bathsheba, the reader is set adrift in an alternative underwater world where whales have developed technology, have reclaimed the depths of the sea and have themselves become hunters. Third Apprentice in a female-only pod under the command of Captain Alexandra, Bathsheba joins the hunt for the terrifying and monstrous Toby Wick. However, when they find a human man abandoned by his crew and Bathsheba is charged with torturing him for information, her perspective on humans and the ethics of the hunt is forever changed.

This book has haunted me since I read it late last year. Ness is a beautiful writer, and he has created a strange and unsettling world for his whales to live in that are realised with Cai’s sublime illustrations. The whales live in exile, only breaching on the rarest occasions and instead relying on breather bubbles that allow them to swim almost forever underwater. Except, to the whales, they are no longer ‘under’. To them, the ocean is their sky and the air below where the men and their ships live is the Abyss. However, the whales’ world is not an easy one to live in. The pods drag around sunken ships, and their cities are built on precipices. They see themselves as hunters but really they are banished, calling themselves hunters but in reality they are just as hunted.

Toby Wick was probably the element that disturbed me the most. Ness never quite gives enough information to the reader about what exactly Toby Wick is. Going much further than Melville’s white whale, the horror of Toby Wick is in the unknown. Is he a monstrous man, is he a machine, is he some awful hybrid of both? We are never truly certain. Throughout the book, hands are a prominent motif representing the ingenuity and dexterity of, and the terror inspired by, humans.

This is a dark and at times unnerving book that does not provide the reader with many answers, but leaves them instead with a lot of questions. A very original take on a classic story.