Medieval fantasy novel about a curse and revenge

This was a set book for my feminist fantasy book club. I have a few books by this author on my shelves, in a couple of different genres, but had never read any books of her books, including from this series. I downloaded an eBook version and settled in to read. 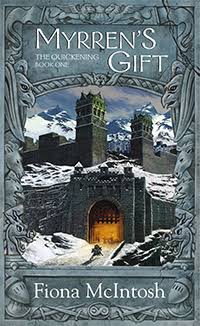 “Myrren’s Gift” by Fiona McIntosh is a medieval fantasy novel about a teenager called Wyl Thirsk who becomes the General of his country Morgravia’s army, following in his father’s footsteps. Although loyal to King Magnus, there has always been tension between Wyl and the crown prince Celimus. When Celimus forces young Wyl to watch the torture and execution of an accused witch, Wyl steps in to try to reduce her suffering. The result is a magical gift that is both a blessing and a curse. When Wyl and those closest to him are betrayed, this terrible gift may prove to be the answer to saving Morgravia from certain destruction.

This is a classic heroic fantasy novel where the fate of the land weighs on the shoulders of a young man. I think probably the most compelling thing about this novel is the tiny amount of magic: Wyl’s life-changing new ability. Without going into too much detail, the very few times in the novel where this was explored in depth were the most interesting parts. There were some interactions between Wyl and other characters that cast this magic into relief, but I did feel that the premise (which almost certainly is explored in greater depth in later novels in the series) wasn’t explored enough in this book.

Unfortunately, there were far, far more things that bothered me about this novel than made it enjoyable. I don’t think it’s possible to talk about “Myrren’s Gift” without talking about violence against women. The society conjured by McIntosh is inherently a sexist one. Women are without a doubt second class citizens considered valuable only for their marriageability. Sexual violence against women was so prolific in the early chapters that I kept count: Myrren was sexually assault by guards and a lord, was sexually harassed prior to being tortured and again by the prince. The king raped his own wife twice.

In fact, it wasn’t until I got to page 1,179 of 1,317 that two women actually spoke to each other about something other than a man – and it was two women discussing how the princess looked like she was in heat. The princess wasn’t great either, to be honest. She was meant to be a tomboy who was “too skinny” with “boyish hips” but also incredibly attractive in that typical early 2000s way. I was really disappointed that McIntyre didn’t give her any more agency than enjoying horse-riding. Valentyna had so much potential, but she just ended up hiding in the woods with a male child, waiting for the hero to save her. I wasn’t particularly happy with the way Wyl was depicted either. There is quite the song and dance about how he isn’t conventionally handsome, and how much more value other characters have simply because of their good looks and height.

I also have to say something about the editing. I’m not sure if this was the case in the original paperback, but the eBook I bought had some serious issues with repetitiveness. For example:

Ancient law requires that the victim be burned wearing the samarra, which was believed to entrap evil humours emanating from the witch’s flesh.

Morgravian law required that the victim be burned wearing the samarra which would trap the evil humours.

“Then if Gueryn is alive – and I choose to believe he is – I think he will remain a prisoner of Cailech for no other task than to entice Caliech’s enemy back”.

Ultimately, although the concept is a really interesting one, the amount of sexism and tautology that you have to wade through for the tantalising scraps of magic don’t quite seem worth it. While I understand that the magic gets explored in more depth in the sequels, I’m just not convinced that I’ve been hooked enough to continue with this series.