I came across this book on Netgalley and was immediately taken by the blurb. 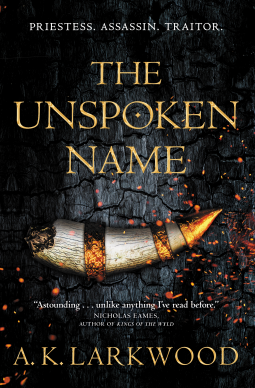 “The Unspoken Name” by A. K. Larkwood is an epic fantasy novel about Csorwe, a teenage priestess who, after a time of giving prophesies to pilgrims, is bound to sacrifice herself to a god known as the Unspoken. Believing this to be her only path, Csorwe accepts her fate to follow in the footsteps of the priestesses before her. However, when a pilgrim comes seeking an unusual prophecy, Csorwe suddenly finds herself with another choice.

This is an ambitious novel that draws upon classic fantasy elements to create a plethora of dysfunctional and dying worlds. Csorwe is an intriguing character who quickly shucks her role as demure priestess to become a warrior who is a part-time bodyguard, part-time assassin. The book blends fantasy with science fiction, with an intriguing system of travelling between worlds through gates with a real space station vibe. I enjoyed Larkwood’s exploration of Csorwe’s physicality, and how she strengthens her body until her muscles are their own kind of armour and the practical difficulties of moving through the world as a being with a pair of tusks. I also really enjoyed the character of Atharaisse, giant intellectual serpent, apparently the last of her species. However, I think my favourite character in the book was Tal, and the rivalry and insults between him and Csorwe (as well as his frequent romantic disasters) were the highlight of the book for me.

However, there were a lot of things that frustrated me about this book. I felt that while Larkwood spent a lot of time on exposition about the gods in these worlds, there was actually a lot less world-building than I would have liked. Each world has its own race, with different languages and cultures, but these were not really expanded upon very much. Interracial romance appears to be pretty common, but there do not appear to be very many interracial individuals. A lot of things were left unexplained, which I won’t go into because of spoilers. I imagine that there are questions that will be answered later on in the series, because there were some questions that I had that were suddenly answered towards the end of the book. Sethennai, the mysterious pilgrim who offers Csorwe another life, was extremely unlikeable and every scene with him in it annoyed me. Ultimately, I felt that while a lot of the elements of a strong fantasy novel where there, there were fundamentally some structure choices which felt a little jarring.

A debut novel with plenty of potential that ultimately left me sitting on the fence.