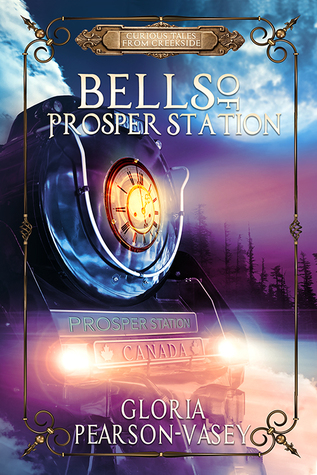 “Bells of Prosper Station” by Gloria Pearson-Vasey is a the first novel in the “Curious Tales from Creekside” series about a nurse practitioner student called Azur who is a Senso: a person with a genetic mutation which makes her sensointuitive. Growing up in a Canadian town called Creekside, every year leading up to Hallowmas, Azur and her sister Hilma would hear the mysterious whistle of a train. However, one year Hilma decided to ride the train back in time and did not return before All Souls’ Day, the last day the train runs until the next Hallowmas. Determined to rescue her sister, Azur decides to ride the train. However, when she arrives in the 19th century town alone, invisible to most and vulnerable to mystical creatures, she must quickly develop her own abilities before it is too late to return.

This is a quick, easy read with a fresh take on the fantasy genre. Pearson-Vasey is a clear, crisp writer who whisks the reader through a well-paced story with plenty of tension. Some of the scenes in the book are simply lovely, and I particularly liked the part where a group meet together at night to draw energy from the moon. The characters were all quite likeable, and Pearson-Valley thought clearly thought very carefully about how to put them to the test in the strange situation they find themselves in.

While I liked the unique premise of the oil industry resulting in some unexpected mutations and abilities, I wasn’t quite sure how that connected to the magic of the train, the time travel and the realm of Vapourlea. As someone very personally connected to the backstory of growing up in Indonesia until the age of 7 with a geophysicist father, I really wanted to know much more about Azur and Hilma’s parents than was hinted at in the book.

An original and engaging story that left me wanting more.