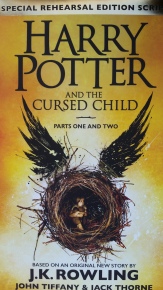 I picked this book up at the Lifeline Bookfair for one reason and one reason only: it is adorable. This little book called “Matchbox Theatre: Thirty Short Entertainments” by Michael Frayn is a small, hardcover book that slides out of its cardboard slip just like a box of matches. It wasn’t expensive and it was pretty, so I picked it up and added it to my to-read pile.

“Matchbox Theatre” is a collection of thirty short vignettes that are presented like tiny skits in a theatre, complete with intermission. This book is very self-aware and the narrator (when there is one) breaks the fourth wall constantly. The skits are generally about ordinary day-to-day interactions with a rather cynical undertone.

Despite there being thirty “entertainments”, I did not find this book entertaining. Maybe I’m too young, or maybe it’s just not my style of humour, but each little skit with it’s own little social jab just seemed so banal to me. The jokes in the majority of these tiny plays felt like they were picking at the lowest hanging of fruit with skits about mobile phones, doctor appointments, foreign names that are difficult to say and difficult wives who nag and finish your sentences for you. This book was an absolute chore to get through and the only thing I felt when I finished it was relief.

To be honest, although this book looks really cute, I would not recommend it unless you were a white male octogenarian who uses phrases like “kids these days”.