One thing that is no secret is that I have been making an effort to read more books by Aboriginal and Torres Strait Islander authors over the past two years. I’ve read several novels such as “Barbed Wire and Cherry Blossoms“, “Pemulwuy: The Rainbow Warrior” and “Terra Nullius“. I’ve also read some non-fiction, most notably “Growing Up Aboriginal in Australia“. Each of these books has had a significant impact on the way that I view this country, and has helped to shed a little more understanding to counteract the misguided or absent knowledge I learned about our first nations people when I was young and failed to take enough steps to correct as an adult. A few people recommended that I read this book, especially after having read “Guns, Germs and Steel“, and I finally bought myself a copy.

The artwork is a magnet my friend bought for me while working in the Northern Territory. The artist is Susan Wanji Wanji, and her art is available via the Munupi Arts and Crafts Association and Alperstein Designs

“Dark Emu” by Bruce Pascoe is a non-fiction book that compiles records from early white settlers to the continent of Australia to extrapolate a more accurate history of Aboriginal people and their relationship with the land. The book is broken up into several chapters that cover topics including Aboriginal agriculture, aquaculture, population and housing, storage and preservation and fire. Pascoe patiently examines each of his sources going through quotes that refer to Aboriginal grain crops, cuisine, wood and stone housing, penned animals and dams.

You can read my review which is going to be quite long and heated, or you can listen to the far more eloquent speech given by the author himself at the National Library of Australia.

Anyway, to be perfectly frank, any history books currently on the curriculum teaching Aboriginal history should be thrown in the proverbial bin and replaced with “Dark Emu”. Up until this point, for the past 230 years this country has been complacent about the biggest example of collective gaslighting of all time: that Aboriginal people did not manage their land and that Aboriginal people allowed themselves to colonised. Slowly, the fiction has evolved over time. terra nullius morphed into the hunter-gatherer story. The hunter-gatherer story changed to the fire-stick farming story. However, until more recently, Aboriginal people have largely been excluded from telling their own stories and their own histories. Until more recently, people didn’t know about the frontier wars, the truth of the Stolen Generations, or the validity of Aboriginal science.

It must be acknowledged that perpetuating this story of “primitive” Aboriginal people is in the best interests of white Australia. The belief that the people who were already here were not really people, or not as sophisticated as the settlers who arrive, has helped to justify white acquisition of land. As an adult, I have heard stories from people while drinking around campfires of Aboriginal artifacts and burial sites being discovered on farmers’ land and removed and destroyed. When I first heard stories like this, I thought it was through callousness and disrespect that someone would do something like that. However, on reflection and after reading this book, I think that ever since colonisation people have actively destroyed evidence of Aboriginal occupation of land because of the threat of native title.

This book is exceptionally well-researched and Pascoe weaves through a carefully considered commentary and some of his own personal experiences alongside excerpts from diaries and letters of early settlers. The book is meticulously divided into easily accessible sections and I actually found this much, much more readable than the important but relentlessly repetitive “Guns, Germs and Steel”. This is a book that is critically relevant to this country’s past and this country’s future. People ask me from time to time, given the area that I work in but certainly not because of any special personal experience, what I think should be done to create a better future for Aboriginal people in this country. I truly believe that we cannot have a better future until we fully acknowledge the past.

I was desperately sorry that I missed Pascoe’s recent talk at the National Library of Australia, but as I said you can watch it online. I cannot recommend this book more, it is an excellent and necessary edition to Australia’s literary scene and I look forward to seeing the works that emerge from future Aboriginal authors through this newly opened door. 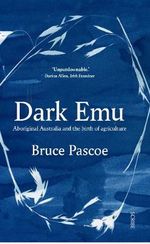