If Cats Disappeared from the World

Japanese magic realism novel about death and the little things

I had noticed this little book a while ago in a bookshop. It has a striking cover, a ink black cat with eyes embellished with gold foil that makes it look like it’s staring right at you. I noticed it, but didn’t buy it. Then one day I was checking my street library, and a copy was sitting right inside. Of course I had to read it.

“If Cats Disappeared from the World” by Genki Kawamura and translated by Eric Selland is a Japanese magic realism novel about an unnamed postman who is diagnosed with stage 4 brain cancer. Distraught, the narrator is offered a deal by the Devil, who appears as his doppelganger, as a way to prolong his life. For every additional day the narrator chooses to live, the Devil will remove an item from the world. The first item seems simple: telephones. However reminiscing about his ex-girlfriend and their relationship which was conducted primarily over the telephone, leads the narrator to reconnect with her one last time. The next item, television, also becomes problematic. When the Devil proposes cats, the narrator is faced with making Cabbage, the cat he inherited from his mother and who has suddenly started speaking, disappear. 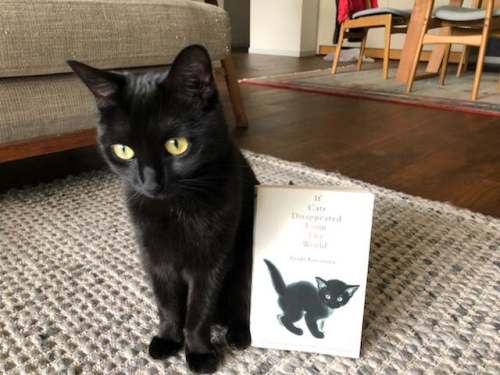 This is an unusual little novel with an intriguing premise: how much of the world can you remove before life isn’t worth living? I quite enjoyed the story of an ordinary man, with an ordinary job, who is faced with the reality of his unremarkable life just before his untimely death. I liked how the author explored the way that the narrator had allowed himself to become isolated, and how he had lost contact with those most important to him and how ultimately, in the wake of his mother’s death, he had himself become lost.

It’s difficult to review a book when you like the idea but not the execution. I want to say something first about the translation, because it’s not clear how much of my criticism is due to the translation, and how much is due to the writing itself. I think that Kawamura has a relaxed, minimalist narrative style that Selland has adapted into a modern American tone. While occasionally drawing on global elements at points in the story such as Christian iconography, the Devil’s choice of attire and his travels with his ex-girlfriend overseas, there is not a very strong sense of place in this book.

While I understand that the narrator is meant to be a generic everyman, with nothing distinctive about his life except his feelings and relationships, I struggled to find a foothold while reading. I think that overall, Kawamura probably spent a little bit too long spelling out exactly what the author was thinking and feeling at any given time, and not really enough on fleshing out the novel’s strength: exploring the idea of what would happen if things started disappearing from the world. Maybe that would be the difference between magic realism and science fiction, but I think I would have preferred Kawamura to have committed more fully to his concept and spent less time the exposition of a backstory that I wasn’t invested in.

An interesting concept that felt like it needed colouring in.