Going Down Swinging No. 30

Last year, I was thrilled to win a micro-microfiction contest with this journal. I was so inspired I decided to buy one of their annual anthologies. I was looking through the store on the website trying to decide which one and I could not go past this one. The cover design is so striking (by Katrina Rhodes) and I was intrigued by the two spoken word CDs included with it, the design of which matches the Fabergé egg-shaped hot air balloons on the covers. I knew that I had to pick this for my Short Stack Reading Challenge back in December.

“Going Down Swinging No. 30” is a special 30th anniversary anthology of short fiction, poetry, comic art, graphic novellas and two spoken word CDs. Although there is an extensive contents page at the beginning, this was a surprisingly quick read. It has a really immersive feel with a very high quality selection of works. Given the number of pieces it is going to be impossible for me to review each or even most, so I will try to highlight some of my favourites.

The Clockwork Children by Felicity Bloomfield was an absolutely chilling horror short story about wanting to fit in with other children that reminded me a bit of “Slade House” or perhaps “Coraline” by Neil Gaiman. Procession by Paddy O’Reilly was a disturbing exploration of what a society with dogs who gained some sentience might be like and the humans who decide to worship them. Rhianna Boyle’s little comic Dirty Joke was a pure and humorous story about making the most of a difficult situation and reconnecting with family. Salvatore Ciliento’s ink illustrations were a beautiful and calming interlude among the written pieces. Shit Brooches by Oslo Davis was a hilarious, punchy little comic that really resonated with me given how popular brooches seem to be over the last couple of years. I thought that Retro Ryder by Robert Caporale was a really interesting take on the trauma of losing a friend when young with a bit of ambiguity thrown in to keep it edgy. I also really liked the realism of Gutted, for Carl Solomon by Luke Johnson which had a intoxicatingly urban setting and examined the ethics of thinking about violence as compared to acting on it. Midlife by Andy Murdoch was an excellent look at intimacy, queer identity and turning 30.

It was a bit hard for me to separate each piece of spoken word on the CDs (let alone find something in my house that would play them!) but the effect of voice over music and ambient noise was very compelling and they definitely added to the overall experience of this book.

A really enjoyable collection and I am keen to get my hands on some more issues of Going Down Swinging.

I really enjoy graphic novels, and knowing this, my partner bought me this book quite a while ago. I’m going to be honest with you right though, there was a very particular reason why I picked up this book to read towards the end of last year. It was December, I had one month left to reach my 2019 Goodreads Reading Challenge goal of 80 books, and I was in big trouble. Whenever I find myself in this situation, there is really only one option: to read the shortest books on my to-read pile.

I took this at The Copper Dragon, a fantasy-themed bar in Tuggeranong, ACT. Unfortunately it wasn’t open, but I really want to visit!

“Jim Henson’s The Storyteller: Dragons” is a graphic novel with stories and art by Daniel Bayliss, Nathan Pride, Hannah Christenson and Jorge Corona with some script and colours by Fabian Rangel Jr., Cassie Kelly and Jen Hickman. There are four stories told in the style of the television series: Son of the Serpent, The Worm of Lambton, Albina and Samurai’s Sacrifice. Each explores the well-known theme of dragon and hero in different cultural and gender contexts.

Also speak of dragons, my city currently has a fire right next to it and I took this immediately after taking the photo above

I think my favourite of the stories is the first, Son of the Serpent. Daniel Bayliss, a graphic novelist and artist from Mexico, draws on mythology and graphic art from native cultures of North America, and his bold, colourful designs are breathtaking.

Probably one thing that made this book a little hard for me was that I actually had never watched Jim Henson’s The Storyteller. Each of the stories is clearly inspired by the format of the television show, with the dog interjecting while the Storyteller tells a tale, and it felt like there were quite a few in-jokes that went over my head. The art on the front cover is gorgeous, but unfortunately it didn’t reflect any of the stories within, and I wasn’t as captivated by the other three as I was the first.

The Secret Loves of Geek Girls

I had been waiting for the right time to read this book, one that I had gotten by way of a Kickstarter some time last year and that came with a gorgeous signed bookplate sticker, and finally the time had come. After days of heatwave, the evening had cooled down enough that I could snuggle in bed with a cup of tea and one of my bestie’s homemade chocolate chip cookies. I’d just come back from seeing the new Disney movie Moana, my dog was coming in occasionally to say hello to me, and in the background was the white noise of a fan and my boyfriend admonishing his randomly assigned teammates in Overwatch over voice chat. The mood was well and truly set. 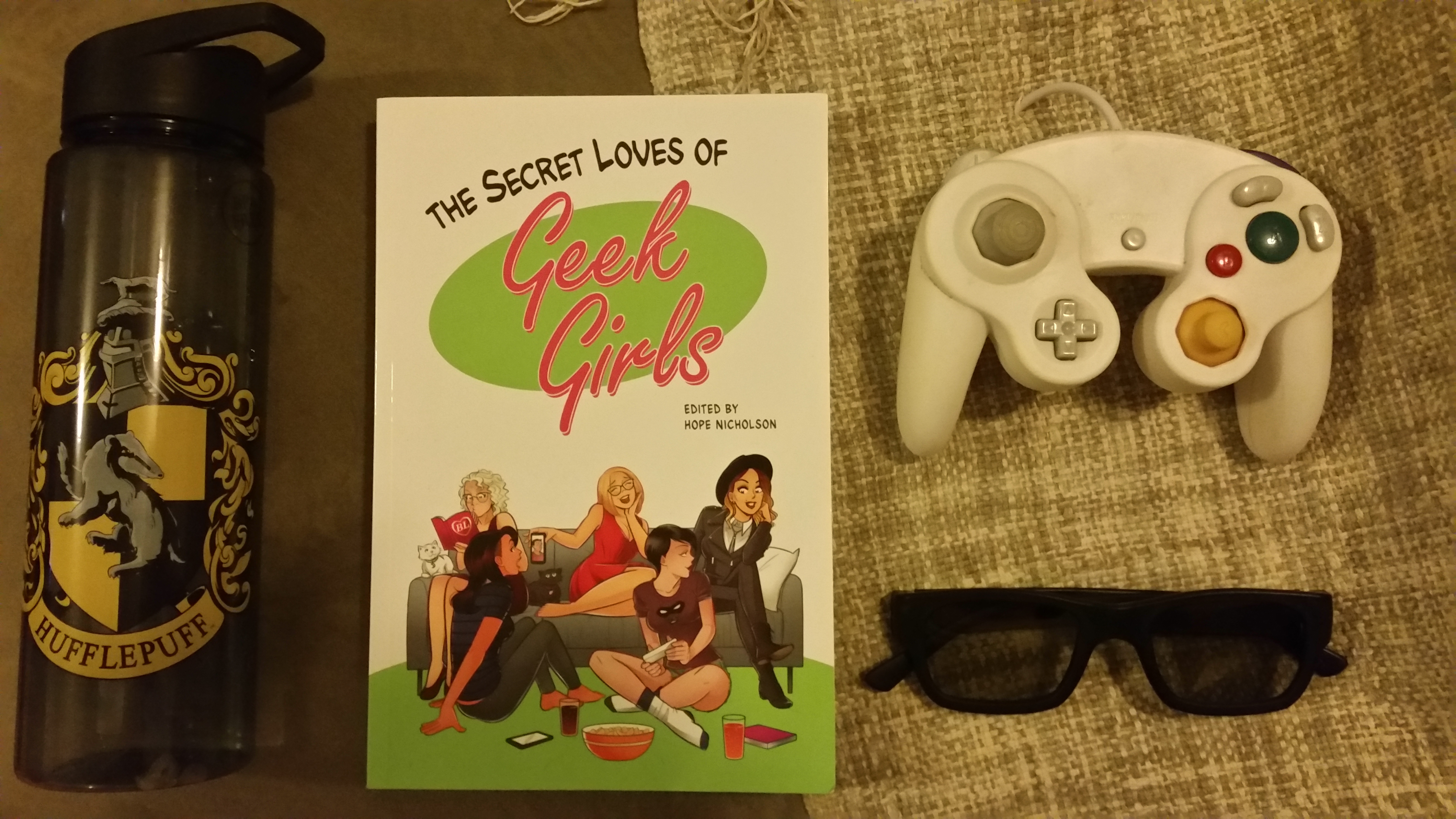 “The Secret Loves of Geek Girls” is an anthology compiled and edited by Hope Nicholson. The book contains non-fiction stories, comics and essays by over 50 creators (including Margaret Atwood) all about being a geek girl in love.

You never really know what you’re going to get when you back a Kickstarter project, but the final product of this book was much more than I had hoped for. It is a real celebration of women’s creativity, passion, intelligence and eloquence. I was really impressed at the diversity of voices that emerged from these pages and I felt their heartbreaks as my own heartbreaks. As somewhat of a geek girl myself, I knew about a lot of the fandoms (though the Dr Who references and any game that wasn’t a single player RPG was a bit lost on me). Some of the stories were much stronger than others, and I loved Minas Tirith, Fanfiction, F/F, angst, Cherry and Montreal, 1993 the most. Some of the artwork in here is spectacular, and some a little less so.

This is an inclusive, well-considered collection of stories by geeky women for geeky women who are looking for everything from something nice to flick through through to dating advice and, most of all, solidarity.